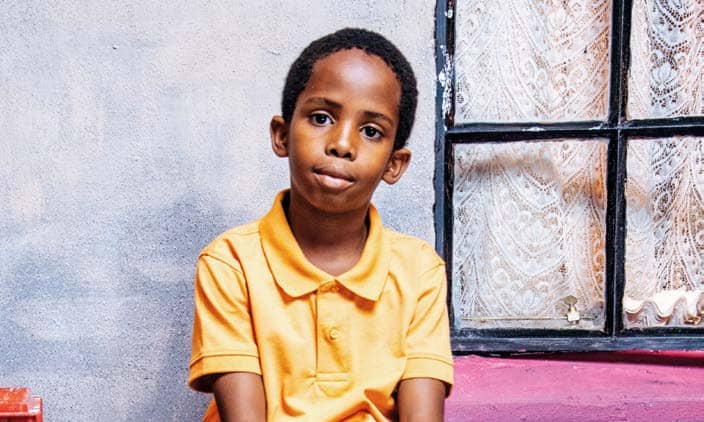 Creative producer Grace Mahlaba reveals how – and why – Scandal! brought their Tebello to life.

Scandal! fans are clamouring for Yvonne (Kgomotso Christopher) and Tebello (Litlhonolofatso Litlhakanyane) to stay together, especially following the death of Yvonne’s mom MaBetty (Francina Maili Morake) – Tebello’s guardian – in mid Feb. Their moving storyline is attracting literally thousands of comments on social media daily as viewers feel those emotions. And aside from the writing, which has painstakingly established a life-changing bond between Yvonne and Tebello (whose name means expectation), a lot of that impact has to do with 10-year-old Litlhonolofatso’s extraordinary performance. It’s a huge name for a small boy, but it’s one that hints at how huge his talent is – and Scandal! creative producer Grace Mahlaba doesn’t shorten it when she describes the lengths that the production team went to find him.

Grace pitched the story after talking through the idea with one of the soap’s writers Omphile Molusi. “We needed something Yvonne had never done and something that we’ve never done,” says Grace. And when they came up with the idea of Yvonne’s sick mother and her child caregiver, Grace knew that she wanted the child to be a boy. “I am so used to girls caring for old sick people. I feel that boys are left out, I needed something to give a boy child hope. I needed something to let a boy child look at himself and think that it’s nothing about female and male. What he is doing is not a job just for women, it is a job that is done for human beings by human beings. He had to think, ‘With what is happening to MaBetty, I have to take care of this woman because she took me in when my mom left me here.’ So it was important to choose a boy.”

YOU ARE A MARVEL

With the character, Grace wanted to reach out to all the Tebellos, living in poverty in what she calls the country’s “forgotten towns”, to let them know that they are seen and they are valued. “Twenty-five years into democracy we seem to be living good lives but there are people who live like that. That life is their real life and it is their beginning and end,” she says. And Grace wanted to show that they didn’t have to speak English or move to a big city and live a glamorous life to be considered successful. “Tebello is so inspired that he is not phased by little things of life. And we have to remind those people like him that there is more to life than glitz and glamour,” she insists. Seeing South Africa embrace Tebello so completely has underlined how important Tebello. But where would they find such a child?