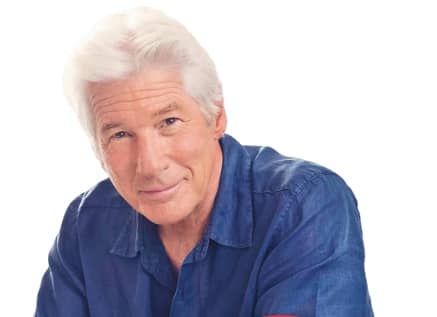 THE LEGENDARY ACTOR IS TELLING PALS HE HAS NO REGRETS ABOUT HIS COLORFUL PAST — AND SAYS HE’S HAPPIER THAN EVER WITH HIS WIFE AND BABIES.

RICHARD GERE has celebrated some major milestones over the past year. Last summer, for starters. the handsome-as-ever A-lister rang in his 70th birthday. Then on April 24, the late-in-life pop welcomed his second son with his wife of two years, Alejandra Silva, giving 14-month-old Alexander a little brother.

Always one to ponder his place in the world, Richard, friends say, has taken this time to reflect back on a life well-lived. Now, insiders exclusively tell Star, the Primal Fear actor has been opening up to friends as never before, lifting the lid on everything from his bad-boy past to his famous feuds to his journey into Buddhism.

And, of course, he's spilling the beans on his sordid and storied love life. The former man-about-town —who was married to supermodel Cindy Crawford and actress Carey Lowell (mom to his son Homer, 20) before he fell for Spanish publicist Alejandra, 37 has been linked to a bevy of leading ladies, most notably his Pretty Woman costar Julia Roberts. He has no regrets, pals re-veal. Richard believes his failed relationships are part of his life's rich tapestry, says an insider, and he's learned from every mistake he made in his youth.