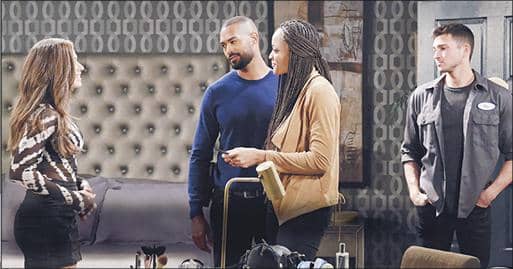 “There is a lot of romance because we packed four weddings into July, which is the bulk of our summer,” previews Head Writer Ron Carlivati. “But not all of these weddings will go smoothly. There’s a lot of payoff that comes out of them. We have these four romantic lynchpins but also a lot of story that plays out in the aftermath of that. And there is that funeral to contend with, as well. There’s a lot of romance, but there’s also a lot of intrigue.”

Four Weddings And A Funeral: “We were looking at the canvas and realized we had all these couples who were in a solid place that probably should be getting married, or at least contemplating getting married. It was a little overwhelming because we were like, ‘Well, which wedding or proposal should we be focusing on?’ and, ‘How are we going to space these out?’ We didn’t want to have one wedding on top of the other. And then we’re like, ‘Well, why not?’ So we came up with the idea of four weddings and a funeral. Once a week in July, you’ll have a wedding and it will kind of culminate in this funeral, as well.” 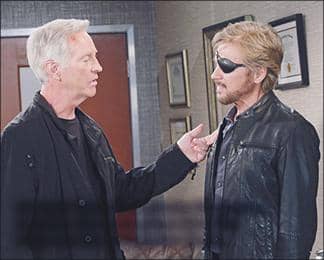 Eli/Lani: “That was one of our couples we thought would be getting engaged. Lani’s looking at the calendar to figure out a date where they could get married that would not interfere with Ben and Ciara or whoever else is getting married. She suddenly has a reaction and realizes that she’s late. They go do a pregnancy test and she’s pregnant. In addition to their wedding, we have the onset of this pregnancy, which is a joyous thing and yet it comes with a lot of trepidation, especially for Lani, since she had been pregnant before and lost the child, David Abraham. While Eli is thrilled, we see that Lani is less thrilled, and basically it’s fear of, ‘I can’t go through that again.’ So that is something that they tackle together and come to a decision about whether or not to continue with this pregnancy. We also wanted a little soapy goodness in there, so there are a couple of uninvited guests that may shake up the wedding proceedings.”

Steve/Kayla: “Hope, John and Marlena talk to Steve and encourage him to put himself out there and just let Kayla make the decision of who she wants to be with, him or Justin. Steve finally decides, ‘You know what, I’m going to stop beating myself up and I’m just going to tell her how I feel. I really do want her back and I still love her.’ As he goes to tell her, he stops short because he sees Justin down on one knee proposing to Kayla. Steve backs off and Kayla does not learn how he feels. Now we have those two engaged. It’s not going to be a long engagement or a long wait. As we’re building to this wedding of Justin and Kayla, the question is, is Steve going to remain backed off or is he going to say something before Kayla marries Justin?” 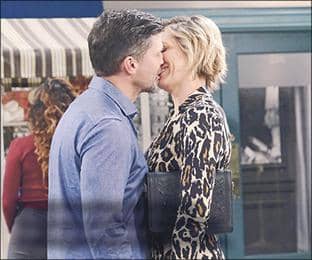 Eric/Nicole: “Eric and Nicole, even before the time jump, were in a place where Eric was about to propose. So when we were looking over the couples, we were like, ‘Why aren’t these two married? They were actually back together throughout the whole time jump.’ They do get engaged. While they’re looking forward to their wedding, Allie Horton shows up on Uncle Eric’s doorstep and instantly turns their lives upside down. She’s now older — we made her a legal age but still on the young side. She’s got a secret that she ends up confiding in Eric and Nicole, but something that she doesn’t want her parents to know. It’s a really fun reintroduction of this character. We kind of thought of her in some ways as like a mini-Sami, as somebody that will come in and shake things up. Besides Eric and Nicole, it will ultimately pull Lucas and Sonny and Will and Rafe into her story.”

Ciara/Ben/Claire: “Ben didn’t want to get married until he could afford to buy Ciara a diamond ring. He’s been saving his money from the garage. But Jake has been mixed up with some dangerous people who are after him. Ben, by working there, got pulled into it. While planning a wedding, at the same time they’re pulled into this mess that Jake is in. Ciara and Ben are both potentially in danger themselves now. But in addition, Claire gets released from Bayview. Claire has basically been given a clean bill of health. She seems to be somewhat fixated on Ben and Ciara’s nuptials, fixated in the sense of wanting to be a part of it, wanting to help because of the suffering she caused them. She wants to help give them this perfect romantic wedding. So the audience has to sort of wait and see what are her true motives. Ben and Ciara are both understandably cautious of Claire, but at the same time, Ciara is a little more open than Ben to letting Claire back into their lives because they’re family.”