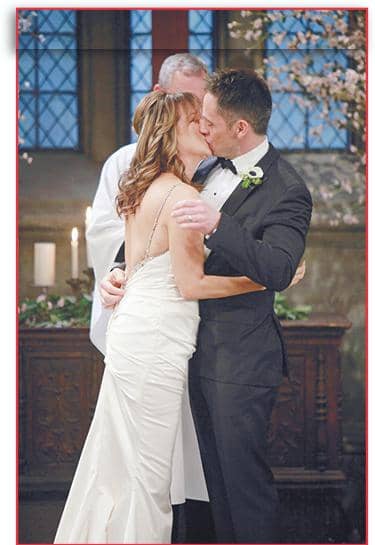 NEWLYWED GAMES Liz tells Franco that she’s over his accidental dig about her art after talking it out with Nikolas. He finds this jarring and confides in his father. Franco is further unsettled when Scott describes how close Liz and Nik used to be and advises him to keep a close eye on them, referencing how Laura ended up leaving him for Luke. Meanwhile, Liz encounters Nik, who tells her that he is trying to be the man he used to be. Liz dings Ava for trying to capitalize on Franco’s serial killer past, and Nik makes a remark about Ava and Franco that leaves Liz uneasy. She again encourages him to give up the Cassadine fortune to regain his relationship with Spencer. Later, at the gym, Franco is rattled to find out that Nik was just with Liz. He tells Nik that Ava told him that her marriage is a sham. Nik stokes Franco’s insecurity with a veiled comment about Ava and Franco.

At Wiley’s hearing, Nelle stuns the courtroom by announcing that she is now Mrs. Julian Jerome. Michael is hopeful that Nelle erred in her choice of spouse, given Julian’s unsavory past. After Martin and Diane give their opening statements, court recesses. Michael, Diane, Willow and Carly head to the Metro Court. Martin approaches them to gloat that his client’s sudden marriage is no different than Michael and Willow’s. Martin hints that he may bring up Sonny’s criminal history at the hearing. Livid, Carly subtly threatens Martin, who warns Julian that he may have to take the stand. Sonny then confronts Julian, correctly surmising that Nelle blackmailed him into the union. Sonny makes it clear that there will be hell to pay if Nelle prevails in court.