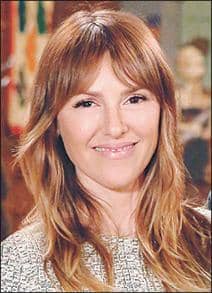 Although Y&R’s Chloe just announced to Kevin that they’re having a baby, her portrayer, Elizabeth Hendrickson, is farther along in her real-life pregnancy.

That’s because the actress was four and a half months in when she finally shared her news with Executive Producer Anthony Marino. “I wanted to say something a little bit earlier; it was just that the opportunity didn’t really present itself because I really wasn’t there a lot,” she explains. “The next time I was there was when we had our big cast photoshoot and that just wasn’t an appropriate time. The next time I was at work, I told Tony first and then he told Josh [Griffith, head writer]. They were so great about it. Their response was really supportive and lovely.”