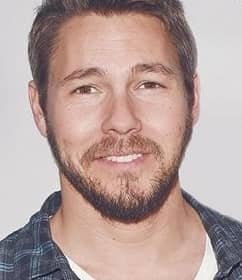 First Audition: “Dillon was far from the first soap role I auditioned for. I auditioned for AS THE WORLD TURNS, for DAYS, and then I auditioned for three other characters on GH before the role of Dillon came along. I auditioned for two different versions of Lucky and two different versions of Lucas. I was 17 or 18, and Mark Teschner, the casting director, knew me by name at that point because I had come in so many times. He was always so nice to me. I think it was maybe my third time auditioning for GH and he knew I was not going to get the job, but he got up from his desk and gave me a conciliatory hug and said quietly in my ear, ‘I’m going to get you on this show if it kills me,’ and that was enough for me. A few months later, I got an audition for Dillon and about a week later, I got the job, and my life changed forever.”

First Day: “My first day was not really my first day. I hadn’t been to a wardrobe or hair. I wasn’t shooting yet. But I had to be a part of the annual cast photo and you can see, they hadn’t figured out my look yet. It was like a proton Dillon, and that was the day where I met everybody.”