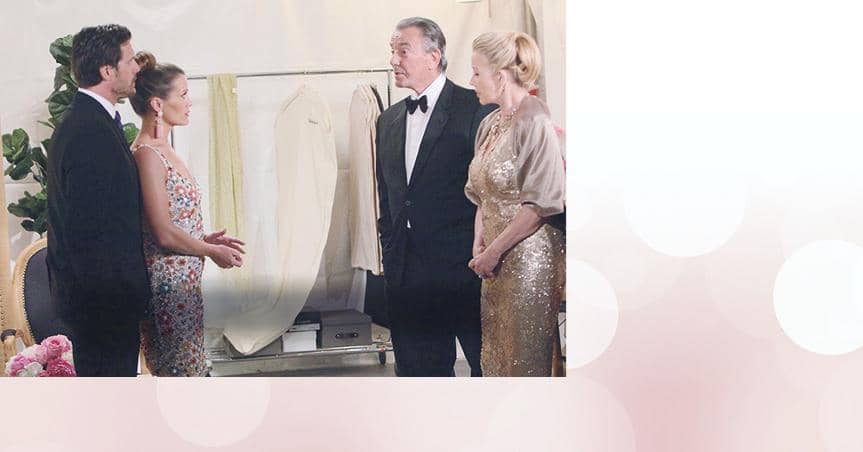 Y&R’s Top Team Reveals What To Expect Now That The No. 1 Show Is Back In Production

Production shutdown happened pretty quickly. Were there finished scripts that had yet to be shot?

“Yes, we had about a month’s worth of material already written. We knew once we came back, we’d have to adjust production to meet new COVID-19 guidelines. There were a lot of adjustments made, taking out physical contact, adjusting scenes so they could be blocked with social distancing in place. It’s working incredibly well in the studio. We’re focusing on the emotions between the characters, and how they can display them without the possibility of contact. It’s heightening the dramatic intensity in the scenes.”

Were you able to turn off your brain during the closure or was your mind working on where to go with stories?

“Ha! I never shut down. The one silver lining in this whole ordeal was that we were able to come back to work with a lot of new story.”

Did you make any changes as a result of having time to look at the canvas as a whole without the pressure of churning out scripts?

“It’s always rewarding to have the time to focus only on the big picture. We had a series of informal calls with CBS and Sony in which we really drilled down into the characters, the canvas and the identity of the show. It was creatively stimulating and energizing.” What was your reaction when you heard Y&R would be back in business? “Tears and joy. Not just for me, but for the entire production team. This furlough has been trying for all of us on so many levels. To be able to return to what we all love to do is something we can never take for granted.”

Let’s get to the stories we’ll be watching. Will there be more fallout from the truth of A.J. Montalvo’s death?

“The entire Newman family will be affected by the fallout from that fateful night in Kansas so many years ago. Victor has kept the secret buried for what he believed was the right reason. But what’s right can sometimes be subjective. Adam’s revelation will push him to an emotional state we’ve not seen before. And that will have a profound impact on everyone around him.”

What kind of Adam can we expect to see?

“As Adam struggles with demons from his past, the fallout will be massive; for Adam, for Victor, and especially for Chelsea. It will also reignite the hatred between Billy and Adam, leading to a major battle between these two. Prepare for some intense Abbott/ Newman fireworks that affect not only Billy and Adam, but Victoria, as well.”

In a recent poll, our readers were most looking forward to story for Devon and Elena. They’re a pretty happy couple, are there plans to shake them up?

“This genre is always about shake-up [laughs]. We have a major story coming up for Elena, Devon, Amanda and Nate. Surprising secrets revealed will lead to unexpected actions and consequences for all four.”

Nick has been trying to keep the peace between the warring Phyllis and Abby. Will he be at all successful or is the animosity between these ladies just heating up?