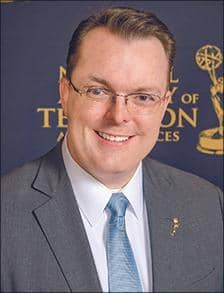 Adam Sharp, NATAS President/CEO, spoke with Digest about what fans can expect when the Daytime Emmys return to prime-time on CBS on Friday, June 26 — but with a twist, insofar as the ceremony will be presented virtually, with celebs participating from home.

The Daytime Emmys were last broadcast on television five years ago, but Sharp says that discussions with CBS actually predated the current coronavirus pandemic, which forced NATAS to scrap its in-person ceremony, which had been scheduled to take place on June 14 in Pasadena, CA. “It’s a conversation that had been in the works since last fall. When COVID-19 hit, that certainly paused the talks a bit as everyone was trying to figure out what this new environment would be. The conversations had been about the traditional ceremony. Then there was a question of, ‘Well, what are we going to do instead? What inventory is CBS going to have?’ So that put things on pause for a while. And then, as we started to get a picture of what at-home, virtual shows might look like, and CBS started to get a sense for its schedule and what they were doing, we returned to the conversation and went ahead. It all just came together very well. It is a homecoming, not just to television but to CBS, which even before this year had done the most Daytime Emmy telecasts and certainly has the most substantial network-owned daytime programming.”