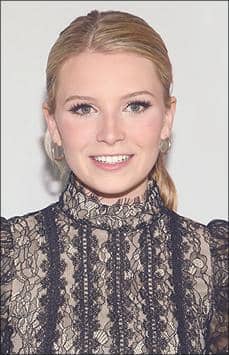 “All of the projects that I was slated to work on were either pushed back or canceled, but because I’ve been working so much, I was a little burned out and looked forward to some ‘me’ time during quarantine,” the actress explains. “But after being off for a few months, I refound my appreciation for acting, so when Y&R called, I was really excited about the role because I was chomping at the bit to work again. I absolutely jumped at the chance to be part of such a legendary show.”

Although Y&R was impressed with her work on OZARK, Thompson was still required to send in an audition tape to be considered. “Doing well on one show doesn’t mean it’s going to translate to this,” she reasons. “There were a couple of other people they were considering, so they sent me mock sides but I had no idea my character had anything to do with Faith Newman. Jordan is a bit of a troublemaker, so I taped two different takes for Y&R, one a little more sinister than the other and they liked the sinister version.”

Jordan, Thompson notes, is similar to Erin. “They are both trying to figure out who they are and with that comes being curious and getting into trouble,” she explains. “Jordan has her faults and unfortunately, Faith looks up to her and follows Jordan’s lead, which is being a little rebellious.”