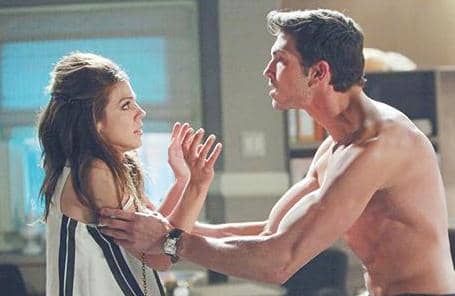 ROBERT SCOTT WILSON (Ben) takes a trip down memory lane as he looks back on four powerful storylines from his time on DAYS.

What were your thoughts when you first learned Ben was going to be the killer? “Oh, man. At first it was a shock, because I was like, ‘Wow! This might be the end of Ben.’ I had that thought for a split second, but then, as soon as I really thought about it, it was like, ‘I’ll have an opportunity to show a little bit more of my range.’ They hadn’t written me a lot of wild rollercoaster moments up until that point. It was an opportunity for me to open Ben up, dig through the trauma of who he really is, and play the bad side of him, bring that to light and give him some more dimension. I saw it not really as a door closing, but an opportunity.”

What stands out to you most about that storyline? “Strangling Will, because it was his friend. It was the first moment that Ben was conscious about what he was doing. He knew he had to do it. It wasn’t something where he blacked out. And everybody liked it, because we did [the scene] again with another actor. We re-created it as best we could. Guy Wilson was playing Will, and he was fantastic. Playing Ben at that moment may have been some of the darkest [work I’ve ever done], for sure.”

Any other memorable moments? “The thing that kind of stirred me up the most was the confession scene. Ben confessed to his father about the murders, mainly killing Will.”

What about the scenes where you kidnapped Abigail and took her to the cabin? “Things started changing in the way [the producers] handled the story. They really took a lot of care and time with what we did and gave us our space. They were really complimentary about what was happening with myself and Kate Mansi [Abigail]. Billy [Flynn, Chad] was involved, especially in those scenes at the end. I love working with Billy, and I love working with Kate. We were just in our zone, and we were doing our thing. You put that all together with the fire and the real baby, it changes things.”

Ben set the bed on fire with Abigail and Chad chained to it. Were those scenes scary to film? “Ben is a wild guy, so we’ve had that pyro team in quite a bit with flames and explosions. They had a flame bar at the end of the bed, which we’ve brought back and used in other scenes. It’s not scary. You just want to focus on the work, but when a stunt is involved you have to pay more attention to the stunt. It’s hard to stay completely committed in a scene. There are other responsibilities over just having a really great performance, per se. It was awesome. I love doing all that stuff.”

How did you feel when the necktie killer story wrapped? “I was proud of it. I was proud of everybody involved. Granted, it was tough because I knew my story might come to an end for a while at DAYS, but the work itself was great and everybody was happy with it. I was like, ‘If I’m leaving, I feel good with this.’ I left on a high note, even though it was a wildly awful, horrible thing for him to do. I was happy to get through it. It was a heavy storyline. It was really dark. It was nice to finally get through it. It was almost like you can breathe again and get that weight off your chest.”