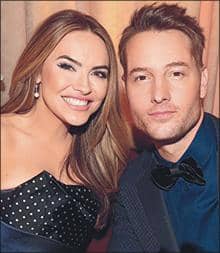 In episode six, titled “One Text Changes Everything”, Stause retreats to the Four Seasons Hotel in Los Angeles after the split in November 2019. During a visit from co-worker Mary Fitzgerald, a stunned Stause reveals that after she and Hartley had a fight, he filed for divorce and texted to let her know. “I mean, I thought we were totally fine,” she cries. “We had a fight that morning over the phone and ... I never saw him since. We didn’t talk things through. Before we had a chance to figure anything out, he filed... Um, I found out because he texted me. That we were filed. Forty-five minutes later, the world knew... Because of the crazy way in which this went down, people want answers. And I f***ing want answers. I know people are saying we were only married for two years, but we were together for six years. In a fight, that’s his go-to ... ‘I’m out, I’m out.’ I hate that kind of impulsive stuff, but I always just thought, you know, that’s just an issue that we work through it.” Ultimately, she admitted, “I just feel stupid... It’s hard ... it takes a toll on your self-worth where you just feel the anger of, ‘How could you do it this way?’ And then the sadness of, ‘I love him so much. This was my best friend. Who do I talk to now?’ It’s just, like, such a roller coaster.”