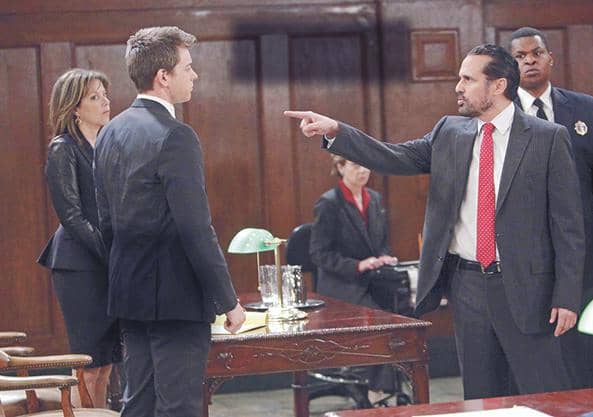 STOCK VALUE Brook Lynn eavesdrops on Olivia during an emotional phone call, then blasts her stepmother in front of Ned, accusing her of having an affair. Liv explains that she was just speaking to a psychic, trying to find out if Dante is okay. Chastened, Brook Lynn apologizes, and Ned tells his wife that he is sorry that he’s been so wrapped up in ELQ that he hasn’t noticed how much pain she’s in. Brook Lynn feels a flash of guilt that she is partially to blame for Ned’s long hours at the office, and asks if someone is attempting an ELQ takeover. He confirms her suspicions, so she privately reaches out to Linc and attempts to find out who is snapping up ELQ shares.

SAY IT WITH FLOWERS

Franco surprises Liz at work with a gigantic bouquet of flowers, wanting to make amends for casting aspersions on her artistic talent. Talk turns to Nikolas, and Liz reflects on her complicated feelings for her longtime friend. When Ava arrives to give Franco his commission for her portrait, she tries to manipulate Liz toward Nik. The chasm between Liz and Franco deepens on account of Liz’s resentment of Ava’s exploitation of Franco’s unsavory past.

Lulu visits Laura and, assuming that her mom doesn’t intend to attend the unveiling of Ava’s portrait, offers to decline the invitation to Wyndemere on their behalf. Laura explains that she plans to go in order to show Nikolas that she still loves him. Nik shows up and fills in his mother and sister about the letter he received from Spencer.

Laura gently offers her two cents about how he should proceed. Nik expresses his gratitude, then reaches out to his son, prepared to respond to Spencer’s ultimatum. Ava presses Nikolas about what he decided to tell his son.