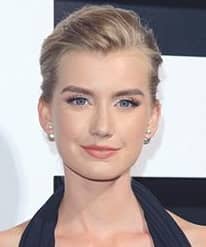 “Well, it was a bit of a whirlwind,” reports the soap newcomer, who began filming in February. “I got the self-tape request through my Australian agents. I was in Sydney at the time. I was like, ‘I’ve never auditioned for a soap opera before but I’ll give it a go.’ And I sent it off and then a few days later, my management called me and were like, ‘Okay, this is looking like they’re quite interested. They want you to do it again.’ And they gave me some notes to sort of change my hair and gave me a few characters notes to play with. I sent off that second tape and then a few days later, my phone rang and they said I got the job.”