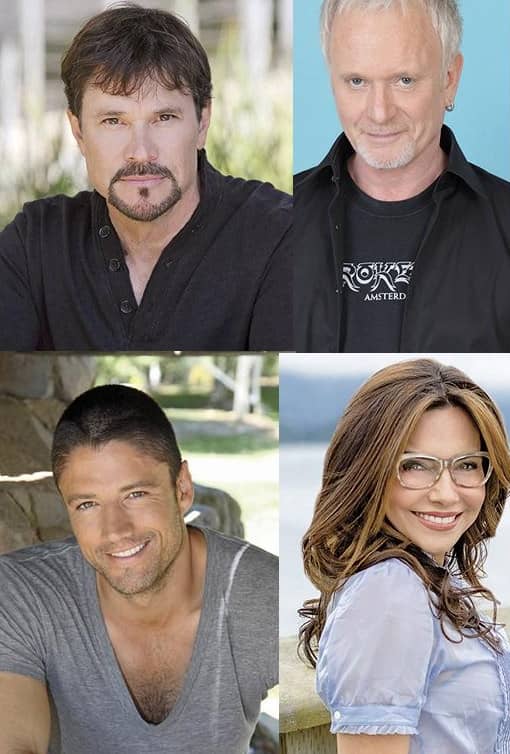 Could four of soaps’ most popular stars return?

You voted on soapoperadigest.com and here’s who you want to see back!

Few actors have had as high-impact a presence in daytime as DAYS’s Peter Reckell, whose Bo Brady made fans swoon and was half of beloved supercouple Bo and Hope. He played the role from 1983-87, 1990-92, and 1995-2012. After that exit, Reckell moved out of Los Angeles, settling in Nashville, TN with wife Kelly Moneymaker and their daughter, Loden.

In 2015, Reckell inked a short-term deal to come back, and his run ended when Bo succumbed to a brain tumor. In an interview with Digest, Reckell addressed the question of whether he would return again. “If you were to ask me that before I came back the last time, I would have said, ‘Of course not,’ ” he admitted. “Who knows? It’s really a question that I can’t answer. I look at my daughter now and she was pretty much the main reason for leaving the last time, besides not really having anything to do on the show that was of substance, and to see how quickly she’s growing, I would not have missed a moment of this last several years of her.”

Reckell was last seen in Salem in 2016, when he appeared in a special Hope-centric episode. That same year, he topped a Digest poll about who fans most wanted to see return to soaps. In response, Reckell issued a statement to the magazine in December 2016, saying, “Once again I am amazed and humbled by the passion, energy, and dedication of the DOOL family. And once again, I have to say how fortunate I have been to be part of the show, and to play such an amazing character.” But he clarified that a long-term return to DAYS was unlikely. “This summer, I did some acting and it took me away from my family,” he explained. “As rewarding as the work was, being away from my family was torture. It showed me that I cannot be away from them for an extended period of time. As much energy and passion and time that I put in to my work on the show, I have that same passion and dedication to my family. Thanks to all who voted; I’m glad Bo remains in your memories as he does in mine. I miss him too. Love Peter.”

Odds Of A Comeback: Under the right storyline circumstances, and particularly on a short-term basis, Reckell’s loyalty to the show that put him on the map — and the fans he holds so dear — could lure him back.