BEHIND the SCENES! & Scene Heard 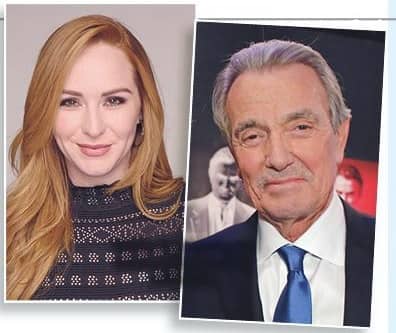 Although Camryn Grimes (Mariah, Y&R) was only 7 years old when she joined Y&R to play Cassie, she clearly remembers the day that she met Eric Braeden (Victor) for the first time.

Although Camryn Grimes (Mariah, Y&R) was only 7 years old when she joined Y&R to play Cassie, she clearly remembers the day that she met Eric Braeden (Victor) for the first time. “It was during one of the famous Newman pool party scenes, so there were a lot of people on the set, and Cassie was being introduced to Victor,” the actress recalls. “My grandfather used to take me to the studio and earlier that day he told me, ‘Okay, you’re gonna meet Eric, so you’ve to be on your best behavior. Don’t play around, be serious,’ and I was like, ‘Okay, got it.’ ” Grimes’s plan quickly went awry. “There was food on the set and I was carrying a big plate of strawberries,” she chuckles. “I wasn’t being careful and, of course, I ran right into Eric. That’s right, the strawberries went all over his pants and on his shoes. I hadn’t even met the man yet and I looked up at him in fear, thinking, ‘Oh, my God, I’ve done it now.’ There was a moment when he looked down at me with this serious expression on his face and then he broke out in the biggest smile and started giggling. To me, that’s the perfect example of Eric as a person and I’ve always loved working with him. He’s such a funny guy. Oftentimes on the set, he can’t contain his laughter. In rehearsals, he’ll do these little characters and when it’s time to shoot the scene, he’ll remember how funny it was and he’ll start laughing. He’s a big goofball.”