B&B BACK IN PRODUCTION! 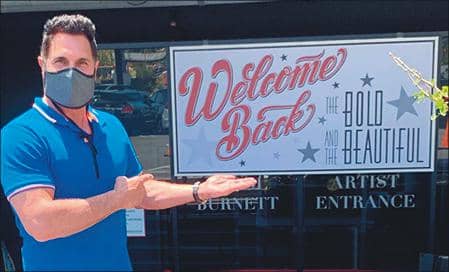 B &B became the first daytime soap to head back into the studio, and Don Diamont (Bill) broke the news on Instagram on June 15 by posting a photo of himself wearing a face mask, standing in front of a “Welcome Back” sign at CBS Television, where the soap tapes. “HERE. WE. GO,” he wrote. “Every bit of safety protocol imaginable is in place, and @boldand beautiful CBS is back in production!!! LET’S ROLL!!!”

Production officially resumed on June 17, and Digest spoke with original cast member John McCook (Eric), who shared that he and the entire B&B team are thrilled to get back to telling stories again. “This shutdown is unprecedented, so it’s been strange to have been cut off from everyone for so long,” he says. “I feel like I’ve been overseas. I know everyone is looking forward to seeing one another again. But, it’s going to be very different.”

In order to restart production, a strict set of guidelines and protocols must be followed at all times. In the 6/29 issue of Digest, Executive Producer/Head Writer Bradley Bell revealed that the studio had already been overhauled to accommodate social distancing. “We’ve been at the studio and we’ve totally revamped the control room and the hair and makeup room,” he said. “We’ve got plastic dividers up and 6 feet distance between everyone in the booth.”