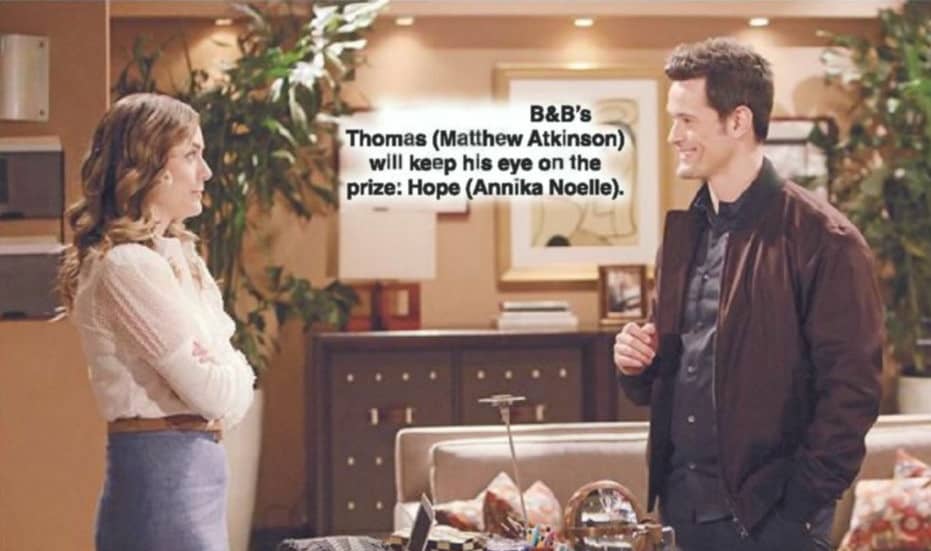 “I’m excited about 2020,” says Executive Producer/Head Writer Bradley Bell. “This year we’ll see more of a balance of story among the cast, and we’re going to see the popular faces. We’re going to feature Rena Sofer as Quinn, and she and Shauna are really going to make a formidable team against these Logan sisters. We’ll see more of Eric. We’ve got some good stuff for Don Diamont [Bill], too.”

Thomas: “We’re going to see Thomas really try to reform. It’s not going to be an overnight process. He is very singleminded on landing Hope. He’s really going to try to become his own man and blaze his own trail in 2020. There comes a turf battle between all the Forresters. Thomas is leading a charge to build a whole new Forrester family, and really trying to evict the Logans. He dreams of a time without the Logans around. Hope, she’s an exception, but the rest of them can just hit the road. Bill is going to really be a champion in this battle for their place at Forrester Creations and in the family. There are a lot of obstacles, but he’s determined to have his way and see his vision realized of a Logan-less Forrester Creations.”

Brooke/Ridge/Shauna: “Brooke and Ridge are fighting for their marriage. It’s a fight and it’s wearing them down. Ridge is determined to make it work but he just can’t be married to someone who despises his son because his son is a part of him. They’ll be dealing with that challenge and Shauna’s going to be waiting in the wings. She’s come to town and become fascinated with Ridge and really would love to share her life with him. It’s fun to embark on a new triangle for Brooke and Ridge, and to have Denise Richards as Shauna is a real dream come true.”

Hope/Liam/Stef fy /Thomas/Zoe: “Thomas is determined to move on. He’d love to move on with Hope, but we’ll see that he and Zoe have connected and they’re going to find something very special. Hope is going to be frustrated, as she’s sharing Liam with Steffy. Liam has a daughter with both Steffy and Hope, and there’s that frustration because she grew up seeing Ridge torn between Brooke and Taylor. She wants a man who’s completely committed to her. So, in that respect, there is a quality about Thomas that is endearing, but she’s very, very wary of Thomas after all they’ve been through.”

Flo/Wyatt/Sally: “We have a great story for Flo, Wyatt, and Sally. Now that Katrina’s [Bowden, Flo] back, we’re charging right into it. I’m eager to give them some solid airtime. We have something that is really going to be very touching and very special and I look forward to seeing that unravel in 2020. We’ll be seeing a lot of those three.”

Katie/Bill: “We just got Heather [Tom, Katie] back because she’s been directing some other projects. Bill and Katie are going to be very wrapped up in family dramas. Katie’s going to be drawn into this story with Brooke and Donna and really fighting off Quinn and Shauna. It’s really going to be something.”

Shocking Death: “We’ll also have a death. A beloved character is going to meet their demise in 2020. I’ll leave it at that.” 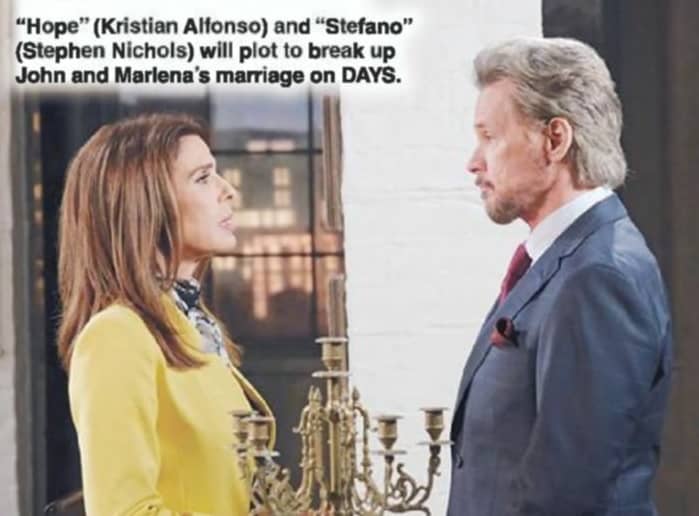 “For early 2020, all the lingering questions about what happened in that missing year are going to get answered,” reveals Head Writer Ron Carlivati. “Two or three big twists and surprises may be something the audience doesn’t see coming.”

Steve /Kay la /Just in /Hope /John / Marlena: “Steve is back so, of course, you’re expecting that Kayla is going to feel some sort of pull toward Steve even though they’re divorced. But ‘Stefano’ has no interest in Kayla; he only has eyes for Marlena. On one hand, Justin feels somewhat relieved but at the same time, Kayla’s trying to understand, ‘Why are you back? Why didn’t you fight for us?’ ‘Stefano’ is forced to kind of juggle that situation while at the same time, how as Steve is he going to pursue Marlena? He and ‘Hope’ come up with an idea and they cook up what they consider the perfect way that if they play their cards right, Gina will get John and Stefano will get Marlena.”

Rafe/Shawn: “We obviously asked the audience to believe Gina has sort of mastered her Hope impression over that missing year and had everybody bamboozled. Even though they’re divorced now, Rafe has noticed the differences in Hope. He finally kind of calls in reinforcements because he’s sort of like, ‘Am I seeing this clearly or not?’ and the next thing we know, Shawn comes to town. What’s interesting is Shawn has a history with Princess Gina, whereas Rafe does not. He’s brought in the perfect person. It seems Shawn may be the one that may stumble upon the Gina of it all, as we like to say.”