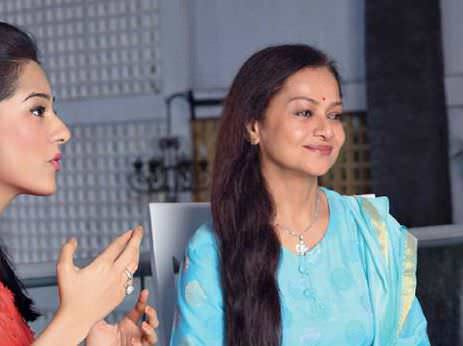 "Give Your Best Years To Your Work And When You Have Had Your Fill Of Work, Only Then Get Married." Zarina.

Zarina Wahab was a school dropout when she trained at the Film and Television Institute of India (FTII), Pune, and still in her teens when she joined the industry. She doesn’t see herself as an extraordinary or bold woman. But that essential simplicity is the beauty of this exquisitely lovely 57-year-old actress, still in demand in the Telugu and Malayalam industry as well as in Hindi films. She is completely without artifice or affectations of any kind. There’s a childlike transparency about her, and that she doesn’t know that, is what ensures it every time.

Amrita Rao’s alabaster translucence and delicate features might fool you into believing she is a docile conformist, but there’s spice when stirred. These two South Indian beauties Stardust pitched together in conversation for the simple fact of both having been Rajshri Films’ heroines. They have both been cast as middle-class, natural beauties, in homely set-ups. They both excel in understated histrionics. It was with heady glee that we experienced the afternoon this cocktail was stirred (not shaken). They’re as unalike as chalk and cheese. The sedate sobriety and steely strength ironically came from the extremely young Amrita, and the childish exuberance and vulnerability was all Zarina.

Has the emotional content in movies today got a new definition?

Amrita: I feel that the content today has changed in terms of dialogues or songs. Songs are emotional now but it is difficult to create the connect it had back then. Lyrics in the past were pure, sensitive and sensible.

Zarina: Lately, there have been so many weird songs, with raunchy lyrics and all that… I remember I was cooking in the kitchen one morning, and suddenly I heard a Gulzarji song from Maachis playing on television and I wondered, how come we don’t have these melodies playing in today’s generation? I left everything I was doing to watch the song. Today, those kinds of songs are not made. Even today, people remember the songs made in the past and sing them.

What about the way human relationships and interactions in films have changed….

Amrita: I think then, they expressed more with eyes. They said a lot of things without saying more. Less was more. Even the physicality aspect was less.

Zarina: There was a touch-me-not feeling in the songs. Today, they get physical first, and then the song starts. Things have changed, and also the viewpoint of the audience. Everything in the industry has changed and you can’t blame any single person for it.

Rajshri Films are high on family values and emotional content. Were they the same back then? Do you feel they have a connect with young audiences today?