The Business of Being Poonam Pandey 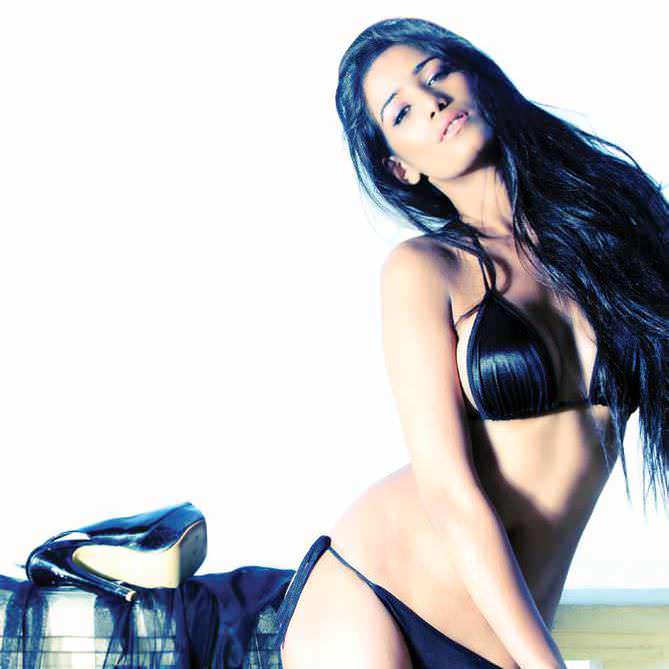 Poonam Pandey with her five-year-long Twitter striptease, knows how to keep lakhs of Indian men hooked online, and turn that into big business.

Men are imaginative beings, which is why I suppose porn is such a successful industry. By nature, we choose to escape into a fairy tale filled with nymphs and goddesses who exist for our pleasure, dropping a bath towel (or a brassiere) at the drop of, well, a hat. Seeing is believing. Vast hordes of men believe that Poonam Pandey is a naughty seductress, a sex goddess, who some day (very soon, really soon, maybe tomorrow) will take off that tiny G-string just for them. Pandey makes herself available for public consumption with every tweet. In an online world where nip-slips and wardrobe malfunctions are juicy clickbait, here is a woman who is happy to flaunt generous amounts of T&A, sans pixellation, sans emoticons, sans blur tool. Poonam Pandey wants you to want to see her naked.

We are sitting in a claustrophobic office in an industrial estate in Mumbai’s film suburb. The office is lit by dim bulbs, and a bunch of producers, complete with thick gold chains and expansive equators, sit behind a glass partition, shrewdly keeping an eye on the interview. Pandey looks like she is dressed for a media event — extra make-up, white (and bursting at-the-seams tight) pinstripe formal skirt and blazer over a blue tank top, which supports her attention hungry cleavage with some difficulty. Men must find it extremely difficult to look her in the eye while talking to her. Pandey is warm and forthcoming, and she often breaks into peals of laughter.

We chit-chat to break the ice; she chooses to use the Bengali pronunciation of my name and then asks what this interview will be about. I tell her that no one has done a profile on her before. Pandey politely tells me that she is just a few years old in this industry and maybe that is why no one has bothered. I tell her that this is the interview, then. Cut the bullshit. Let’s get real. She laughs again, wide-eyed and then says, “Okay. I will be honest. I will tell you everything.”

After a few modelling gigs post-college, Pandey was selected as one of the top ten Gladrags models in 2010 and then cracked her way into about 29 fashion calendars by 2011. Soon after, though, she was almost forgotten. That is when she found Twitter and drove the country crazy with her “will strip if India wins” proposal during the 2011 cricket World Cup. Tabloids and gossip columns lapped her up, and numerous stories about her — mostly untrue — started doing the rounds. India duly won the tournament, but Pandey claims that the BCCI did not allow her to take her clothes off as promised. Make of that what you will.

In 2012, she was featured in the Kingfisher calendar and Pandey was back in the news for claiming she would strip naked for the Kolkata Knight Riders after their IPL win. Her blink-and-miss Bollywood debut, Nasha, happened in 2013. Twitter has been her best friend since then, and if her recent International Yoga Day video is anything to go by, her fan base has increased by 4 million views. These days, Pandey is busy posting skimpily-clad selfies on Twitter and hunting around for a male lead for her next film, Helen. According to Google, in 2014, she was the ninth most searched-for person on the internet.

“I always wanted to be in this industry since I was a kid,” Pandey starts. “But, I never planned anything. My parents never took me seriously. When I told my dad I wanted to audition for Gladrags, he laughed and casually agreed. They thought all of this was a phase. We are a small family of six — my folks, two siblings and a dog. But, being from a Hindu Brahmin family, there were too many rules and baggage. They finally sat up and took notice when the Kingfisher calendar happened, but they never wanted me to be in this industry. Honestly, even I don’t know what I am doing. Things just happen.”

What drove her to films, then? “I always wanted to be a model. I believe I still am. But, then greed gets the better of you. When movie offers started pouring in, I was like, try karke dekhte hain.” Pandey’s story is as bland as it sounds. Out of the millions of women who want to be where she is (and are possibly much more talented), it is sheer luck and a lack of inhibition that have helped her. While I ask her about Twitter and her fan following there (706,000, at last count), in my head, I am trying to grapple with morality, personal code of conduct and other serious shit like that.