THE MOST HATED MAN ON TV! 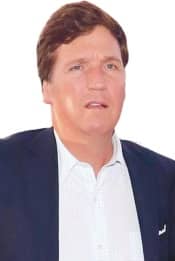 TALKING head Tucker Carlson is the most hated man on TV, according to insiders who brand the FOX News host a raging, hot-tempered tyrant who has driven his staff to open revolt with ugly sex and racism scandals!

Although his ratings are through the roof, the 51-year-old married father of four has triggered more controversy in recent years than any other broadcast journalist, with shocking on-air attacks on homosexuals, illegal immigrants and Blacks, sources claim. His terrified staff is said to be seething behind the scenes over what they see as his blistering racist and sexist remarks.

“But Tucker could care less what his critics have to say, quite frankly,” says an insider. “He knows a lot of people hate his guts, but his stance is that someone’s gotta tell it how it is and if that means he attracts criticism and makes a bunch of enemies along the way, then, well, so be it.”

“At the end of the day, he’s covering hot and hard topics that are always going to divide people’s opinion. Being despised is part of the job,” the source says, “and he’d rather that than be a soft liberal type who sits on the fence and doesn’t have the guts to speak up.

“This is a guy with skin as thick as a rhino who relishes controversy, for sure. He’ll take these phonies on all day long and enjoy it — just so long as his viewing figures go up, of course! It’s like Tucker’s saying, ‘Bring it on, I don’t care if I’m the most hated guy in the world!’

“He’s got a bloated ego the size of Alaska and a fierce temper! He does whatever the hell he wants without regard for anyone else — and the network seemingly lets him.