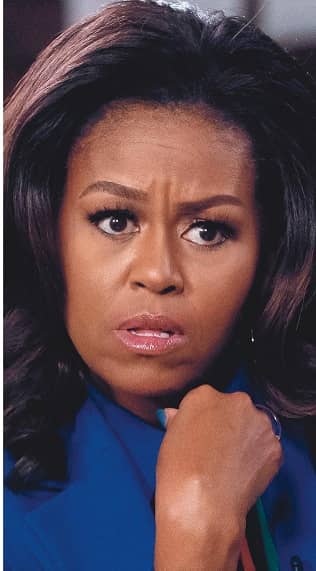 Confesses she felt like tossing Barack ‘OUT THE WINDOW!’

The 56-year-old mom of two dropped the bombshell revelation to talk host Conan O’Brien on a podcast in the run-up to the former first couple’s 28th anniversary on Oct. 3.

She also admitted her furious feelings toward the former president are “intense and these periods can last a long time.” She confessed, at times, “I wanted to push Barack out of the window.”

One pet peeve is his habit to tell her he’s on his way home, then dawdling and arriving much, much later.

Now insiders are bracing for the bickering power couple to finally divorce!

“They put on a good show in public but the reality is that things are bleak as hell for Michelle and Barack right now,” dishes a source.

“They bicker nonstop behind the scenes and seem to butt heads over things that may seem trivial to start with but then quickly skyrocket.

“In the old days, they had this ability to put their differences to one side and agree on compromise. But now there’s a stubbornness and overwhelming sense of tension that lingers between them.