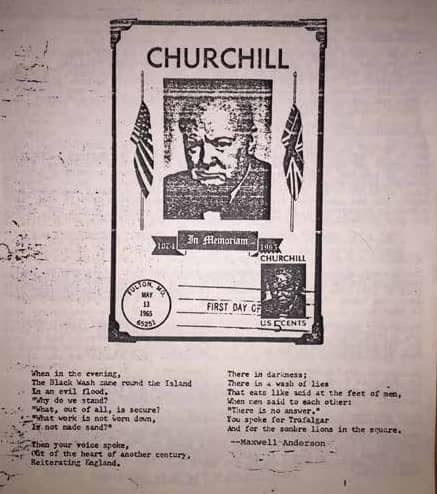 This is the 180th issue of Finest Hour. The operating budget for the first year of what became the International Churchill Society was $180. The first issue of the journal was sent out to the founding members—all twelve of them—in the spring of 1968 with a note that the title was only “temporary” until a better suggestion arose. Fifty years on, the current editor has determined that the cut-off date for suggestions has now passed.

The International Churchill Society was founded because Richard M. Langworth did not want to buy phony stamps.

Following the death of Sir Winston Churchill in January 1965, a rash of commemorative stamps was produced in his memory. The major issuers were the quasi-autonomous Arab sheikdoms Ajman, Fujiera, and Sharjah, which printed countless different designs, called “black blots” by philatelists, that were always intended to bilk collectors rather than to frank envelopes. Each design deliberately included many variants so as to entice those obsessed with having “complete” collections. 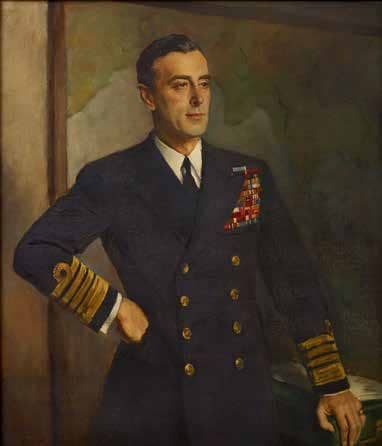 The American Topical Association, the presiding US authority on thematic stamps, appeared indifferent to this obvious charlatanism. After contacting other members of the ATA who had expressed an interest in Churchill, Langworth organized the Winston S. Churchill Study Unit (WSCSU) for the purpose of identifying and distinguishing between legitimately issued stamps and black blots.

Finest Hour began as a bi-monthly newsletter for the WSCSU. Dated “May-June 1968,” the first issue ran to seven, mimeographed pages including a three-page checklist of stamps. Annual dues were $2. 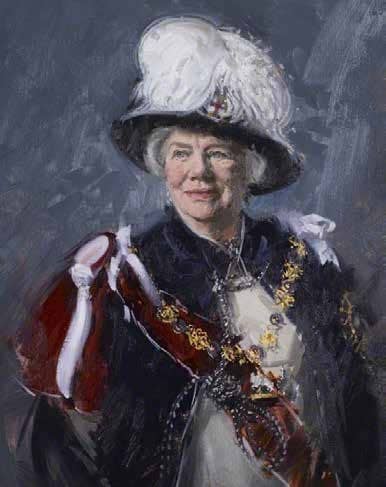 In the early issues, most of the articles focused on stamp collecting and included prodigious warnings about those ubiquitous black blots. There was, however, an early movement to publish more generalized information about Churchill. Crucially, the organization reached out to establish a link with the Churchill family from the very beginning. Comments from Randolph Churchill were published in the first issue, and he was made Honorary Member Number One before his untimely death. His mother Clementine and son Winston became Honorary Members Two and Three respectively.

Langworth served as editor for the first thirteen is-sues and two years of the WSCSU. Then, with is-sue number fourteen in May 1970, Dalton “Dal” Newfield took over as editor. Dal’s effervescent personality bubbled over the pages of Finest Hour. From his home in Sacramento, California, he began the process of transforming the journal and the organization into more general platforms for the study of Winston Churchill.

In the autumn of 1971, issue number twenty-one of Finest Hour was published as the “Bulletin of the International Churchill Society.” Appearing on the cover was Lord Mountbatten, the society’s newest honorary member and later its first Patron. ICS could claim 154 members in nine different countries including Vietnam and Iran. A record meeting of one dozen people took place in Los Angeles at the end of the year. The first meeting of ICS (UK) took place the following year in London at the Charing Cross Hotel.

Despite reorganization and rising membership, the new society still maintained a precarious existence. Even Dal’s prodigious nature was strained when he agreed to serve as president of ICS while remaining editor of Finest Hour. Eventually he was able to turn over editing duties to Stephen King (no, not that Stephen King), but in 1975 King was also constrained to give up the unpaid job in order to attend to personal affairs. For want of an editor, the International Churchill Society was forced to fold after six-and-a-half years.