Perfect Preparation: What Churchill Learned from the First World War 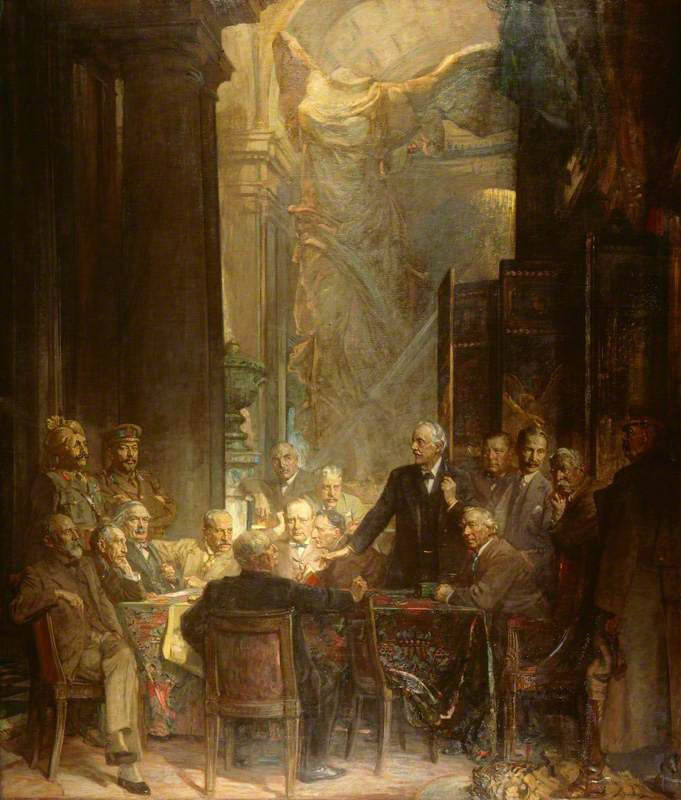 Winston Churchill famously wrote about his feelings on becoming prime minister in May 1940, “I felt as if I were walking with Destiny and that all my past life had been but a preparation for this hour and for this trial.”1 It was true, and no part of his life had been a better preparation than 1914–18.

The way that Churchill learned from his and others’ mistakes of the Great War, putting the lessons to good use in the Second World War, is an object lesson in statesmanship.

On the outbreak of the First World War in Au-gust 1914, Churchill set up the Admiralty War Group, which consisted of himself and the four most senior admirals there. It met daily—sometimes several times a day—to take all the most important strategic decisions. This concentration of power worked well, and agreed upon the overriding objectives for the Royal Navy in the conflict. Elsewhere in Whitehall, however, the organization of the war under Herbert Asquith, the prime minster, was ludicrously haphazard. Decisions were taken by a few ministers called together ad hoc in emergencies without minutes being taken. Only at the end of November 1914 was a War Council of eight members formed, which soon grew to thirteen. From his own experience, therefore, Churchill learned how important it was to take a grip on the organization of the central decision-making bodies and to keep the numbers involved as small as possible.

In the first days of the war, Churchill also set up a new Royal Naval Division, an infantry force under the control of the Admiralty rather than the Army, which was repeatedly to distinguish itself in action in many of the bloodiest engagements of the war. It proved the template for later units that he brought into being in the Second World War, such as the Special Air Service, Special Boat Service, Commandos, and Parachute Regiment.

On 19 August 1914, only a fortnight after the out-break of war, Churchill visited the mayors of Calais and Dunkirk to discuss the redoubts they were building there. His personal knowledge of these Channel ports was further enhanced in May 1918 when Field Marshal Sir Douglas Haig gave him the Chateau de Verchocq in the Pas-de-Calais. Knowing the area intimately was to prove invaluable in the Second World War when decisions had to be taken about the defence of Calais and evacuating the British Expeditionary Force from Dunkirk.

On 26 August 1914, Britain’s Russian allies captured the code and cypher books from the German light cruiser Magdeburg after it ran aground on the Estonian coast. These allowed the cryptographers in the Admiralty’s Room 40, the codebreaking operation that Churchill had set up some time earlier, to start decoding German signals in real time. Churchill did not inform the Cabinet, but kept the secret within the Admiralty War Group. It was also Room 40 that intercepted the Zimmerman Telegram that helped bring the United States into the war in April 1917. Long before Bletchley Park, therefore, Churchill appreciated the vital importance of signals intelligence.

On 7 September 1914, the Belgian Government asked for a force of twenty-five thousand men to defend Antwerp against the German Army moving rapidly towards it. “The Admiralty regard the sustained and effective defence of Antwerp as a matter of high consequence,” Churchill told Asquith, Secretary for War Lord Kitchener, and Foreign Secretary Sir Edward Grey. “It preserves the life of the Belgian nation: it safeguards a strategic point which, if captured, would be of the utmost menace.”2 Churchill went to Antwerp to try to prevent the city falling, which it did not do until 10 October. He was much criticized, and in 1931 he reflected on the whole episode in his essay A Second Choice: “I ought, for instance, never to have gone to Antwerp,” he wrote. “I ought to have remained in London….Those who are charged with the direction of supreme affairs must sit on the mountain-tops of control; they must never descend into the valleys of direct physical and personal action.”3 Yet in going, he displayed the same determination to be at the centre of events that he was to show again and again in the Second World War, as he climbed onto rooftops during the London Blitz, tried to watch D-Day from the Channel, attended Operation Dragoon in a warship, visited the front line in Italy, and so on. Doing so gave him insights into the conflict that he could not get from the mountain-tops.

After the battleship HMS Audacious hit a mine off Lough Swilly on 27 October 1914 while carrying out firing practice, Churchill kept the information out of the newspapers, not wanting to advertise that the Grand Fleet was north of Ireland. His belief in trusting the people occasionally had to be tempered by common sense, and in the Second World War there were also several occasions that Churchill similarly ordered press black-outs, such as after the loss of the RMS Lancastria with 4,000 lives in June 1940, the Bethnal Green tube disaster that cost 173 civilian lives in March 1943, and the Slapton Sands debacle that killed 800 American soldiers in April 1944.

Churchill’s appointment of the seventy-three-year-old Lord “Jacky” Fisher, whom he described as “a veritable volcano of knowledge and of inspiration” taught him a lesson he was not to forget in the Second World War.4 Along with Haig, Beatty, and Field Marshal Sir William Robertson, Fisher became an overmighty subject, virtually unsackable by the politicians. In the Second World War, Churchill always kept his generals and admirals under no illusions about their subordination to the civil power. Similarly in the Great War, Lord Kitchener could not be removed due to his enormous popularity, despite the many mistakes he made. In the Second World War, Churchill made himself Minister of Defence, giving him command over the Service ministers, none of whom he allowed to wield anything like the power that Kitchener had possessed.

Churchill differentiated between “the brass-hats” of the military and “frock-coats” of the politicians and thought that all too often in the Great War the former decided on which battles and campaigns were fought where, using their immense authority with the press and public, while the politicians all too often had to accept it. In his Second World War memoirs, Churchill cited the fact that after the failure of the naval attack of 18 March 1915, he had been wrong in “trying to carry out a major and cardinal operation of war from a subordinate position.”5 As Minister of Defence after May 1940, he would come up against some tough and even domineering Service chiefs in the Second World War—Alan Brooke, Andrew Cunningham, and Arthur Harris among them—but they knew themselves always to be in a subordinate position.

On the day that Fisher took up his post, the enemy ships Goeben and Breslau shelled Odessa and Sevastapol in the Black Sea. In reply, Churchill ordered the bombardment of the Turkish Outer Forts of Sedd-el-Bahr and Kum Kale in the Dardanelles, which was duly done on 4 November, the day before Britain and France declared war on Turkey.6 To commence hostilities without a formal declaration of war was a serious matter, but Churchill was to do it again on 3 July 1940, when he ordered the shelling of the Vichy French fleet at Oran.