A Regency Fit For A King: Churchill Visits Athens, December 1944 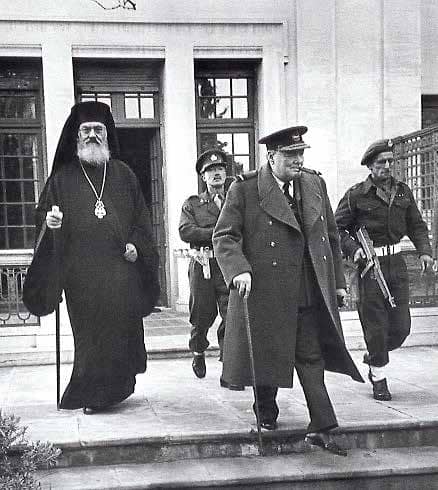 At Christmastime 1944, Winston Churchill travelled to Athens. It was a perilous journey, but the stakes were high: the future of Greece.

Recently liberated from the Axis, Athens was now beset by confrontation between the communist-controlled EAMELAS (the first being a communist-led resistance group and the second her military counterpart) and British forces positioned in the Greek capital, assisted by Greek army units and security forces loyal to the Greek government. Both sides sought control of the city. The armed clash that ensued became known as “Dekemvriana” and ended with a British victory over the Greek communists.

Churchill arrived in Athens determined to use his influence in the negotiations between the Greek government and EAM in order to create a provisional government and avoid the outbreak of civil war. He also wanted to keep Greece free of communist control.

The Forces in Play

As early as 1943, when it was evident that the liberation of Greece from the Axis was imminent, clear differences emerged between the various Greek guerrilla forces fighting against the Germans and Italians. The main resistance groups were EAM-ELAS (which was the largest) and the right wing but mainly republican EDES. Both fought the common enemy but were also determined to consolidate their power and ensure that they would play a significant part in Greek politics after liberation. Another player was the Greek government in exile, which was essentially monarchist and in close relations with the British government, on whose support it was counting while it controlled the Greek military forces fighting in the Middle East and later in Italy.1

Gradually all the Greek resistance organizations were either eliminated or incorporated into EAM-ELAS and EDES, leaving only two factions with influence and power on Greek soil. Not satisfied with their respective areas of control, however, the two sides confronted each other militarily, beginning what is known as the “first round” of the Greek Civil War. Round One ended with the Lebanon agreement, the signatories of which included EAM-ELAS, EDES, and the Greek government in exile. This pact ensured the ending of hostilities between the two resistance groups and provided for the creation of a provisional government under George Papandreou, one fourth of whose cabinet would have to be composed of EAM-ELAS affiliates. Moreover, according to the armistice agreement signed on 20 May 1944, all the resistance groups would be subject to the control of the new government, as would the Greek armed forces in the Middle East; but this was not put into effect.2

Churchill was determined to support the Greek government and prevent the capture of Athens and Salonica by the communists. On 21 August 1944, he implemented operation “Manna,” which provided for the dispatch of a British military force of 10,000 men under Lieutenant General Ronald Scobie to Greece with the mission of securing and holding Athens and Salonica immediately after the withdrawal of German troops.3 Developments continued with the signing of the Caserta agreement in Italy between the Greek government and EAM on 26 September. This placed all the resistance units under the control of Scobie, while the communists accepted the arrival of British forces on Greek soil, agreed to keep ELAS out of Attica, and recognize Papandreou’s government as the EAM ministers took up their cabinet posts in Italy.4