THE EVOLUTION OF WOMEN'S LEADERSHIP 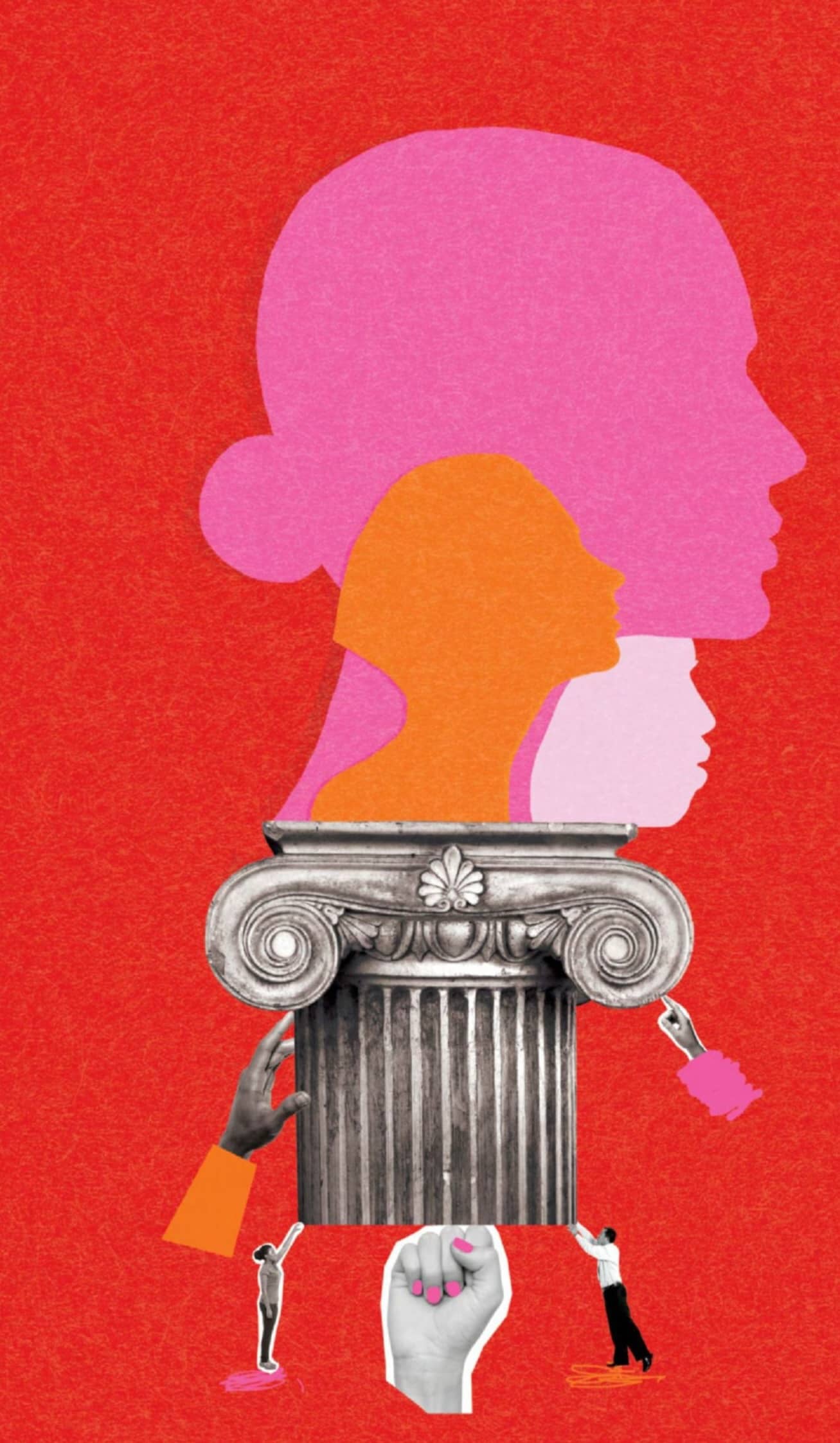 Understanding how female leaders have developed over time can help us embrace the potential for their future advancement.

IN OCTOBER 2008, the Royal Barrière Hotel in Deauville, France, was the backdrop for the annual conference of the Women’s Forum for the Economy and Society. I’d attended the conference before and had found it earnest and sedate, in keeping with the luxurious but faux-historic venue (the original hotel having been bombed to rubble during World War II). But in 2008 — one month almost to the day after the collapse of Lehman Brothers — rebellion stirred the air. Participants were abuzz with outrage at events that had gathered momentum in the previous months and then, with remarkable speed, led the global economy to the brink of collapse in September.

The Forum was loosely modeled on Davos: several days of panels, workshops, keynotes, champagne toasts, and five-star dinners that brought together leaders and other professionals from around the world to discuss issues of global significance. Except at Deauville, the participants, speakers, and hosts were mostly women.

One keynote speaker captured the mood at the 2008 gathering. “These guys,” she sputtered from the lectern. “They kept telling us we weren’t qualified to make the big decisions. We didn’t understand strategy, we lacked vision and guts. It’s time for women to stop buying into this myth that we aren’t ready for top positions. Clearly, the world can’t afford for us not to step up!”

In the years since, progress for women has proven substantial yet uneven. More women have assumed leadership of huge and influential companies (GM, IBM, Lockheed Martin) and global institutions (the IMF, the World Bank, the European Central Bank). Thirty-seven of the companies on the Fortune 500 list currently have female CEOs (a record high, though still a low number). More women have also been elected to high office around the world. Since 1946, 64 countries have had a female head of state or government, according to the Council on Foreign Relations’ Women’s Power Index. As of May 2020, 19 countries were being led by a woman.

At the same time, many women in companies large and small continue to remain stuck just below the VP level. Moreover, in PwC’s 2019 Annual Corporate Directors Survey, only 38 percent of directors said that gender diversity is very important to their board. This was down from 46 percent the year before and was the lowest figure reported since 2014.

Meanwhile, women-owned businesses have grown rapidly: As of 2018, there were more than 12 million in the U.S. alone, compared with just over 400,000 in 1972. Yet many of these enterprises remain dramatically undercapitalized when compared with male-owned businesses, in part because women struggle to get a hearing from venture funds.

These are the facts, and they tell a story. But what I have observed from the position I have been privileged to occupy for the past three decades on the front lines of women’s leadership suggests another, parallel story. It’s one that relies less on numbers than on an accumulation of representative anecdotes and a willingness to look below the surface to discern larger social, economic, and technological trends. For 30 years, I’ve worked with women leaders around the world, helping them recognize, articulate, and act on their greatest strengths and address the barriers that undermine their efforts to build rewarding and sustainable careers. During that time, I have watched as women’s perception of themselves as potential leaders has undergone a remarkable shift.

Women have become far more confident about what they have to contribute. They have learned through experience the value of female solidarity and support. They have become more comfortable enlisting men as allies, just as men have become more open to being allies. Each of these changes has specific causes and effects, yet they all reinforce one another. Of course, what holds true for women holds true for other historic outsiders to mainstream leadership and business, and the path to power has been particularly narrow and distinctively challenging for women of color. As I offer my perspective on how “women’s leadership” has evolved, it is with the recognition that this evolution has not looked the same for all women.

At Deauville in 2008, I knew I was witnessing a landmark moment in women’s quest not only to assume positions of power, but to exert influence on the decisions that determine humanity’s common social and economic fate. Speakers pointed out the relative absence of women who had played a role in causing the crisis, something the era’s most visible and astute chronicler, Michael Lewis, would later note. And they repeatedly referenced the high-profile women who warned of trouble during the run-up to crisis. Financial analyst Meredith Whitney had stunned markets in early 2007 when she forecast massive write-downs for some of the most exalted names on Wall Street. Federal Deposit Insurance Corporation Chair Sheila Bair repeatedly raised the alarm on the dangers of subprime lending. Brooksley Born, former head of the Commodity Futures Trading Commission, had spent the previous decade pleading for the regulation of derivative contracts. Unable to make headway, she resigned her post.

The almost mythological character of the conversation at the conference, which featured a series of Cassandras, prescient yet unheeded, resonated with many of the participants. They were women who had been frustrated by decades of halting professional progress, and who had struggled to make their voices heard at the most senior levels, where strategic decisions were made. They viewed this moment as an opportunity to strengthen their resolve and push through the skepticism that had dogged their efforts to move ahead. That frustration and resolve have both remained constant through a succession of subtle but distinctive turning points that have collectively informed the way in which many women recognize not only what they have to offer as leaders but why their success can profoundly benefit their organizations.

Understanding this interconnection of events and trends, and how it has defined the evolution of women as leaders, can help us prepare for the new turning point that the coronavirus crisis seems poised to present. The pandemic is disrupting organizations, economies, and societies around the world, forcing many of us to alter how we live, work, communicate, and think about a future that appears more uncertain than we had previously imagined. As we move through the crisis, the jarring impact of this shift will inevitably reshape what people will look for in their leaders — which should have far-reaching consequences for women.

By the start of the 1990s, women had been routinely entering the workplace for 15 or 20 years. Yet during that time, the expectation among both women and the organizations they worked for seemed to be that women would simply slot into cultures and structures that had been designed entirely by and for men. As a result, it was commonly assumed that any woman who aspired to a high position would need to adopt traditional male behaviors and style.

The literature for aspiring career women that emerged in the late 1970s and 1980s strongly supported this view. Influential bestsellers like The Managerial Woman and Games Mother Never Taught You urged women to suppress skills, attitudes, and ways of communicating that might have been useful in managing a family but that had little place in the dog-eat-dog workplace. As one author bluntly advised, women would do well to “leave [their] values at home.”

Corporate training programs for women — admittedly rare in that era — reinforced this advice. I recall a popular session on “How to Talk Male” (hint: Use lots of sports metaphors). I also recall self-styled experts advising women on how to act like one of the guys while barhopping with male colleagues (hint: Don’t take offense at off-color jokes). Awkward corporate fashion shows encouraged women to wear a skirted version of the male suit, complete with a little tie, always in sober colors.

The belief that half of humanity could enter a domain that had formerly been the sole preserve of the other half without altering the culture seems, in retrospect, naive. But even as women’s workplace presence and ambitions grew, this assumption remained widespread. It was reinforced by certain aspects of the 1990s economic boom.

For example, despite the obvious shift in workplace demographics, the era proved a golden age for the kind of no-guts-no-glory macho leadership style previously associated with corporate raiders and the “greenmailers” of the 1980s. As some of these raiders took control of formerly staid organizations they had leveraged to the hilt, there arose a narrowed focus on maximizing short-term profits as the sole rationale for business and the only yardstick by which success should be measured. This operating philosophy encouraged leadership behaviors that explicitly put people last. The business press, taking its cues from celebrity journalism, relentlessly promoted a handful of corporate leaders as tough, bold heroes suited to the era, bestowing upon them memorable nicknames meant to convey ruthlessness: Chainsaw Al, Neutron Jack, Bob the Beast.