REGENERATIVE PRODUCTS JUST MIGHT SAVE THE PLANET — AND THE ECONOMY 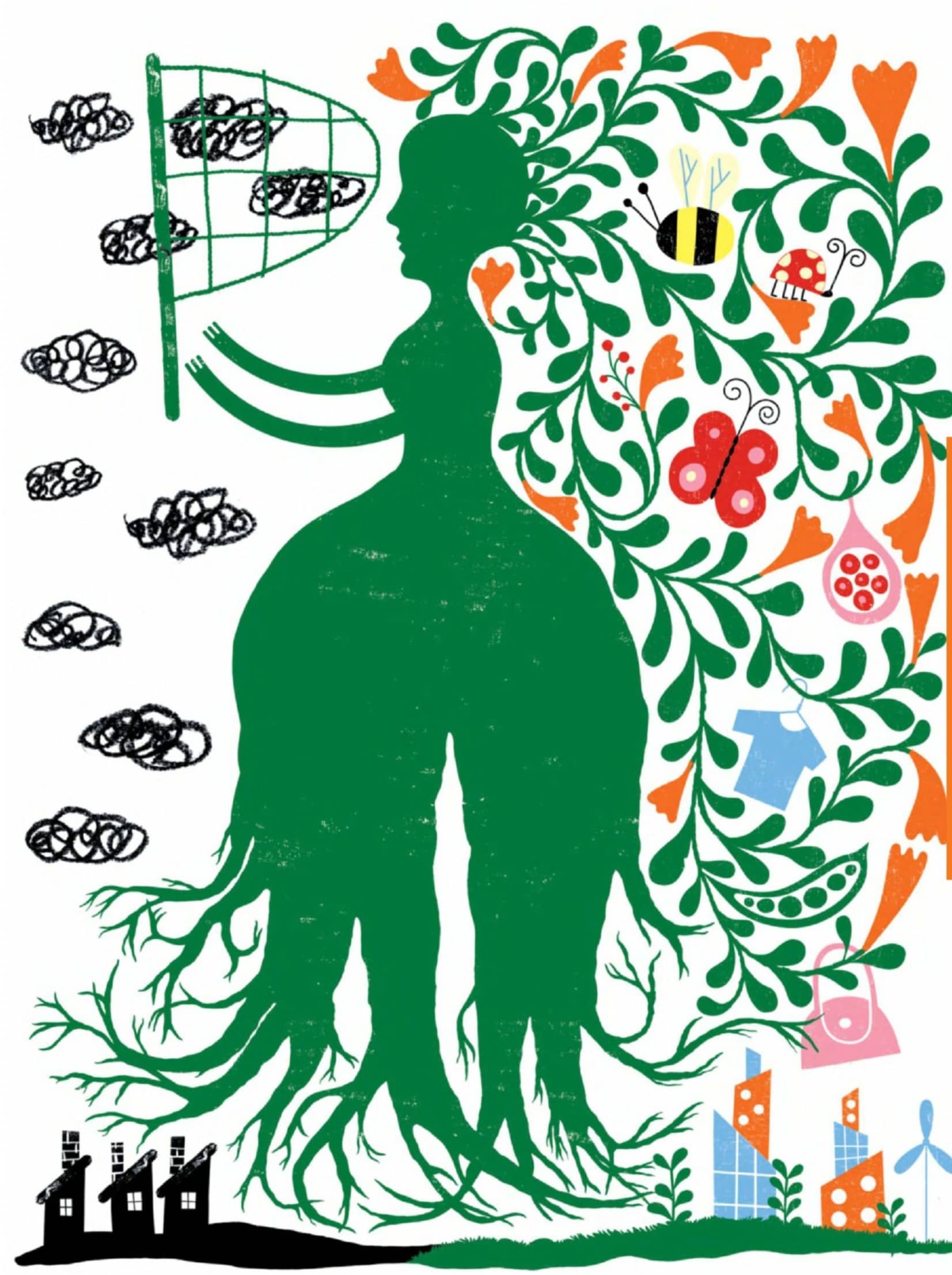 Business ventures that go beyond emissions reductions to actually remove existing carbon and other pollutants from the environment could be good for both the planet and profits.

With the help of science, we’ve come to understand our impact on the planet that is our home. With each item we produce, building we construct, forest we cut down, acre we plow, and journey we make — enabled by resources we derive from our planet’s prehistoric past — we do small amounts of harm to the fragile balance of nature that sustains life. As we’ve replicated our capabilities and developed our ability to scale, those tiny harms have multiplied to the point that the cumulative damage now threatens our planetary life-support system.

Efforts to address this situation have so far consisted of denial, modest efficiency improvements, recycling, and, in some cases, the substitution of products less harmful than their predecessors. But these well-intentioned actions are not nearly enough to stop, let alone reverse, the effects of global climate change. What we need is a way to rewind the ecological tape — a regenerative approach — and the leadership to make it happen.

Imagine an economy based on this principle of regeneration, an economy that uses our highly productive capabilities to not just reduce but actually undo environmental harm, all while continuing to provide the products and services on which we’ve come to depend. And what if making some relatively simple changes to how we use existing tools — along with employing important new ones, and at little to no additional cost — were to enable this shift?

This scenario isn’t just possible; it’s already happening. The real question is: Can it happen at the scale needed before we reach an environmental tipping point? And what will it take to prompt such significant action? The financial opportunities embedded in such a change might just convince alert business leaders to transform, especially as the economic crisis caused by COVID-19 prompts businesses to look for alternative revenue streams and growth strategies. A recent report from the nongovernmental organization Carbon180 assesses the total annual market opportunity in simply replacing existing materials with those that are derived from captured carbon dioxide (and are therefore regenerative) at US$5.91 trillion globally, and $1 trillion in the U.S. alone. Although these numbers should be viewed as an upper bound, they demand attention. And they represent only part of the regenerative picture.

A best-selling 2017 environmental book, Drawdown: The Most Comprehensive Plan Ever Proposed to Reverse Global Warming, presents cost-effective climate actions that businesses can take. The word drawdown refers to the point in time when greenhouse gases in the atmosphere peak and begin to decline, and it will be achieved through a combination of reducing sources (emitters) and increasing sinks (absorbers). Regenerative solutions fall into the latter category. And according to a recent update from Project Drawdown, a nonprofit run by the same team of scientists and economists who worked on the book, that “increasing sinks” category constitutes anywhere from 16 to 44 percent of the total contribution to the goal of drawdown. Implementing all the regenerative solutions that the book recommends could potentially remove from the atmosphere between 73 billion and 127 billion tons of carbon dioxide equivalent by 2050.

Making the changes recommended will be a monumental undertaking and investment, but will bear huge dividends in years to come. And companies that commit now to regenerative solutions will create a clear path forward in the fight against climate change.

Katharine Wilkinson, the vice president of communication and engagement for Project Drawdown and lead writer for the book, told me, “It wouldn’t surprise me if the discourse starts to shift toward not just responsibility for the emissions you’re creating today, but a need to actually [take] back the carbon you produced over the life of the business. That’s what the next generation of pioneering leadership would look like from the corporate world.” And in fact, in January 2020, Microsoft became the most recent company to make just such a commitment, joining others, such as IKEA and Intuit, that had made similar pledges in recent years.

Below are four of the most promising regenerative solutions outlined in the Drawdown book. Two require changes in how we look at agriculture. The other two involve reimagining how products are made.

What’s dirt got to do with it?

When people think about what causes climate change, they tend to think of burning fossil fuels. But that’s only one of several key triggers.

A tremendous amount of carbon has shifted from our soil into the atmosphere as a result of the way agriculture has been practiced for centuries. Every time a plow breaks the surface of the ground, carbon dioxide is released. Why? Because microorganisms that live in the soil die. Those microorganisms play a huge role in maintaining carbon balance. They work to synthesize carbon into organic material and they respirate carbon dioxide, similarly to how plants both take in and let out carbon dioxide. But when soil is plowed, micro-organisms die and cease taking in carbon dioxide. Only the carbon output associated with their death remains. Topping that off, nitrogen fertilizers, when applied in excess, give off nitrous oxide, an even more potent greenhouse gas, as they decompose. Modern agricultural practices, including monoculture (the cultivation of a single crop in a single area) and the extermination of competitors and pests, have steadily reduced biodiversity and ignored the vital role it plays in maintaining carbon balance.

The resulting destruction has become a major contributor to climate change. Worldwide, soils have sent about 147 billion tons of carbon into the atmosphere since the dawn of agriculture (equivalent to 536 billion tons of carbon dioxide). That’s between 20 and 40 percent of the native organic carbon that exists in cultivated land, overall.

A number of organizations, such as the Soil Health Institute, have been leading the way toward regenerative agriculture, defined as farming practices that pull carbon out of the atmosphere while restoring degraded land, reducing chemical use and runoff, and increasing biodiversity, both above and below ground.

Cereal giant General Mills recently committed to advancing regenerative agriculture with a focus on soil health. It vows that by 2030 it will use such techniques on 1 million acres of North American farmland that supply oats and other grains to its factories. That, according to now-retired chief sustainability officer Jerry Lynch, represents roughly a quarter of the company’s total North American land footprint. The path to this commitment, said Lynch, began in Paris in 2015, when General Mills brought a contingent of farmers to the United Nations climate talks, and invited them to share their perspective on climate change. “Many of them talked about the power of building healthy soil,” Lynch told me.

Lynch spent the next nine months with experts at the Nature Conservancy, the Soil Health Institute, and the Soil Health Partnership developing a road map for the company’s farmers. “This is really a way,” said Lynch, “for policymakers and anyone interested in agriculture to think about the power of soil to help improve farming and reduce [accumulated] GHG [greenhouse gas] emissions.”

By following the Soil Health Institute’s recommended practices — which include reducing tilling, increasing crop diversity, keeping the soil covered year-round, using cover crops in winter to maintain living roots in the ground, and reintegrating livestock into the landscape — farmers can improve the soil health at the farms supplying General Mills. This means greater fertility, increased carbon sequestration (of carbon from the atmosphere), strengthened water-holding capacity (drought resistance), more resilience to extreme weather (risk management), better water quality, reduced runoff, less need for pesticides and herbicides, better biodiversity above and below the soil, and — perhaps most surprising — improved profitability for farmers. Conventional agriculture has maintained a narrow focus on maximizing yield, but regenerative agriculture emphasizes efficiency, which, by working with rather than against nature, ends up reducing reliance on expensive chemical inputs such as fertilizers, pesticides, and herbicides. This often results in slightly reduced yield, but higher profit per acre.

“I’d been involved in sustainability at General Mills for 10 years,” said Lynch, “and I hadn’t seen anyone thing that created so many wins at the same time.… And that’s exciting.”

That excitement has translated into more than $5.5 million in investment for activities such as research, training, support for participating farmers, underwriting of pilot programs, and partnerships with startups. During the transition to these new methods, farmers could see a temporary decline in revenue, an issue exacerbated by revenue disruptions due to the novel coronavirus pandemic, so this support could prove vital. As the company’s regenerative agriculture program rolls ahead, General Mills is carefully monitoring three outcomes: soil health, biodiversity, and economic resilience for farmers.

According to the analysis provided in Drawdown, regenerative agriculture will reduce atmospheric carbon dioxide by 22.3 billion tons by 2050, at an estimated cost of $79 billion for full implementation, and result in an ultimate net savings in excess of $2.5 trillion between 2020 and 2050.

Send in the cows

The rotational grazing idea was brought to the U.S. by Zimbabwean ecologist and cattle rancher Allan Savory in 1979. Savory’s decades-long fight against desertification, or the degradation of fertile land into desert, has been based on years of observation and experimentation. He came to appreciate the importance of the interactions between grazing animals and healthy grasslands — grasslands that take carbon out of the air through photosynthesis and bring it underground through their roots, where bacteria then bind it to the soil.