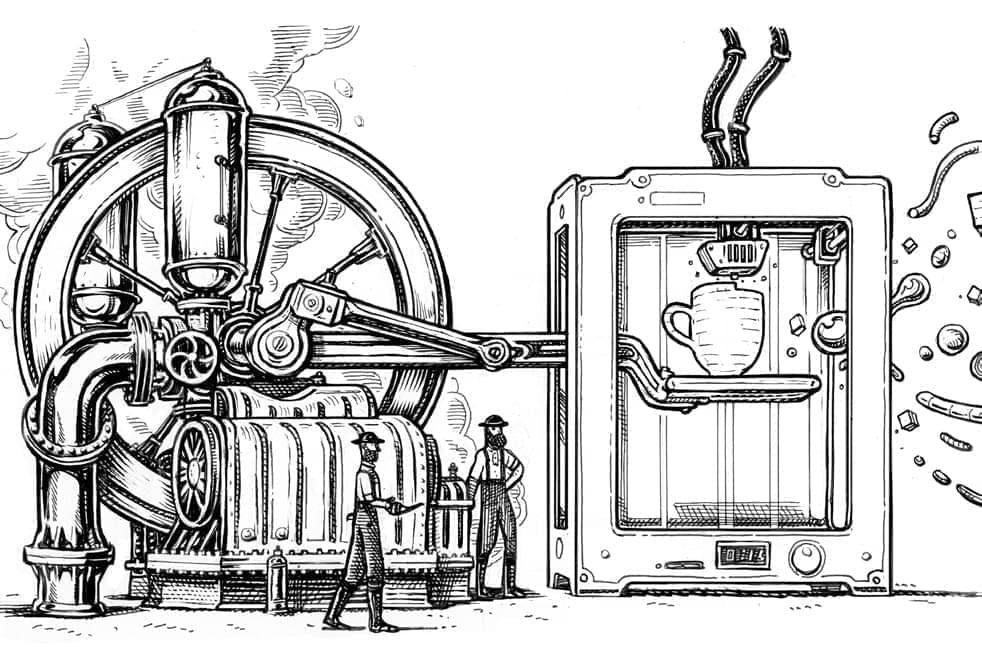 How one of the biggest companies you’ve never heard of may create the future of manufacturing.

To understand the future of manufacturing, you have to look at the past. Until the early 20th century, most factories were powered by steam. Enormous central steam engines drove massive shafts, which in turn sent power to individual cutting and shaping machines through elaborate belts and gears. Then came electricity, and most companies replaced their steam engines with electric motors. The rest of the factory — all the shafts, belts, and gears — kept working as before, just with a different power source.

Of course, the factories would have been much more efficient if the companies had seized the moment and replaced that single central motor with individual motors throughout the plant. They could then have revamped the factory to ease production flows as well. But that would have involved redesigning the entire factory layout, an expensive and conceptually radical proposition that many factory owners didn’t even know was possible. What followed instead were decades of slow but steady plant reorganization as the masters of industry sorted out how best to realize the full potential of electric power.

Flash forward to today, and the same issue is present in most versions of Industry 4.0, as the convergence of digital technology innovations in the energy and manufacturing sectors is known. Companies are investing in artificial intelligence (AI), the sensors and connected devices of the Internet of Things, 3D printers, and other advanced manufacturing and supply chain technologies. But they’re keeping the traditional assembly line, complex supply chains, and other long-standing practices intact. The industry is still essentially in a transitional period in which companies are learning about the new technologies and figuring out how best to integrate them into production. With experience, they will gradually drop their current approaches, bringing Industry 4.0 to a new stage and transforming manufacturing altogether.

At the leading edge of this transformation is an unlikely sector: contract manufacturing. Jabil, headquartered in St. Petersburg, Fla., is one of the biggest companies you may never have heard of, and it is combining supply chain expertise and 3D printers to point the way to the digital future.

As an established contract manufacturer, Jabil has capabilities in product design and manufacturing, as well as expertise in composite materials and miniaturization. It counts Apple, Cisco, and Skullcandy among its customers. Companies increasingly bring in Jabil as a partner at the beginning of product development, not just at the end to carry out a design. Jabil also supports customers in packaging and distribution. Because of this, Jabil bills itself as a provider of wide-ranging manufacturing services, well beyond production itself. In that respect, it is as sophisticated as its larger and better-known rivals, Foxconn and Flex.

Jabil has recently embraced a game-changing technology: 3D printing — or, more generally, additive manufacturing. This is the use of digitally controlled fabrication machines to generate products and parts one at a time, without retooling. Jabil’s investment was originally just an extension of Jabil’s traditional manufacturing capabilities, undertaken mainly to reduce production costs. The company bought hundreds of 3D printers for that purpose, using them for prototyping new products and making production equipment.

Then Jabil began using them to make commercial components in large quantities for more conventional assembly processes. Expanding in this way, increasing the number of printable parts, is slow going, because each part must be certified for safety and performance. Depending on the regulatory structure of a given industry, certification is handled by the government, a third-party tester, or the company itself.

While building up its additive capabilities, Jabil has also expanded its digital supply chain management. With dozens of factories and overlapping client jobs, Jabil hopes to save a lot of money and time for itself and its customers by combining orders. Coordinating all of this is InControl, Jabil’s supply chain decision support platform, which it has developed over the past decade. Jabil has used this platform to anticipate or quickly spot trouble, such as materials shortages or production-capacity issues. Once aware of the problem, managers can rapidly adjust production locations and schedules, as they did in 2016 when an earthquake disrupted some of Jabil’s Japanese suppliers. Jabil is now taking InControl further, using it to optimize each product’s value chain. Customers vary, after all, as to how much they value speed, cost savings, and low risk. Using analytics, InControl can run scenarios and suggest changes according to customer preferences, both in the supply chain and in the factory.