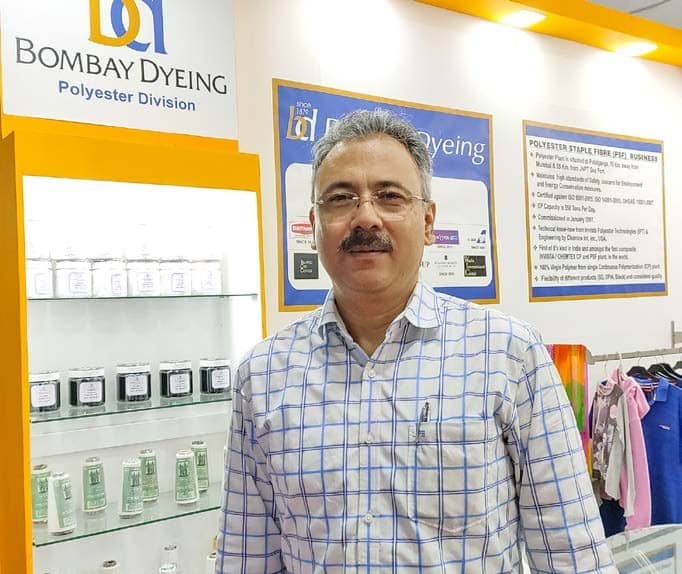 Bombay Dyeing is a name that needs no introduction to anyone familiar with the textile industry of India. It is a household name that has resonated across several generations of Indians. A key part of the multi-directional Wadia Group, which has got interests in chemicals, agro-products, foods, light engineering, textiles, electronics, plantations, laminates, consultancy, architecture, health aviation, hospitals and real estate, the Wadia Group continues to be counted among the top names in the Indian industry even after over 250 years since its inception.

One area where Bombay Dyeing has been silently marching ahead, charting out its own distinct growth path, is polyester. Bombay Dyeing’s polyester division which is engaged in the manufacture of 100% Virgin polyester staple fiber (PSF) has made a mark for itself in the textile industry with its range of high-quality products. Bombay Dyeing is one of the seven producers of PSF in the country with a market share of about 15%. The PSF Division achieved a turnover of Rs. 1,439.28 crores during the year ended March 31, 2019, as compared to Rs. 1,251.95 crores in the previous year.

We met Mr. Rajnesh Datt, Senior Vice President - Sales & Marketing, Polyester Division, for an exclusive interview. A senior technocrat with around 30 years of experience, Mr. Datt has been with Bombay Dyeing since 2012, after earlier stints with the Thapar Group (JCT Ltd.) and Indo Rama Synthetics. Mr. Datt gave detailed insights into the history of Bombay Dyeing, its polyester division, manufacturing facility and what makes its products stand out, among others. The edited excerpts:

We began the interaction by asking Mr. Datt to throw some light on the history of Bombay Dyeing. Going into details, he said: “Bombay Dyeing is part of the Wadia Group that was started way back in 1736. Very soon we will be completing 300 years. The group started with building warships, which were supplied to the Royal Family of England, as well as the US and other countries. You will be surprised to know that the present national anthem of the US was composed on our ship in 1810. The Nanking Treaty ceding Honk Kong to China was also signed on one of our ships in 1898. It has indeed been a very long and successful journey.”

The group companies include, Britannia, Bombay Burmah, Bombay Dyeing Home & You division, Go Air, National Peroxide Ltd., and so on.

Speaking specifically about Bombay Dyeing, Mr. Datt observed that the company was officially incorporated in 1879, although it was already dealing with textiles before that. “With respect to textiles we now have the Bombay Dyeing - Home & You division and the polyester division,” he added.

Bombay Dyeing entered the PSF business in 2006. The PSF plant at Patalganga in Raigad district was started with technological knowhow from Invista (erstwhile DuPont) and Chemtex, USA, which had developed the NGSSS (Next Generation Staple Spinning System).

Mr. Datt explained: “Our manufacturing plant is located around 75 km from Mumbai. It is also just 35 km away from the Jawaharlal Nehru Port. Trucks take about an hour from our factory to reach the port. The factory was actually established somewhere in the 1980s to manufacture DMT (dimethyl terephthalate), when it was considered a premium product. By 2004, however, its use started declining and got replaced by PSF. So we put up a brand-new plant with new civil work in 2007”.

Going into details regarding the capacity of the plant, Mr. Datt said: “The mother of a PTA plant is CP, otherwise called as continuous polymerization. Our CP capacity is around 500 MT per day. But then you need to remember that we produce many specialty items. Whenever we are running specialty products our capacity is around 450 MT per day. Otherwise, our daily production crosses 500 MT per day. It also depends on market conditions. For example, our annual capacity is nearly 160,000 MT. However, there have been times when we have produced more than 15,000 MT in a month.”

MORE STORIES FROM THE TEXTILE MAGAZINEView All