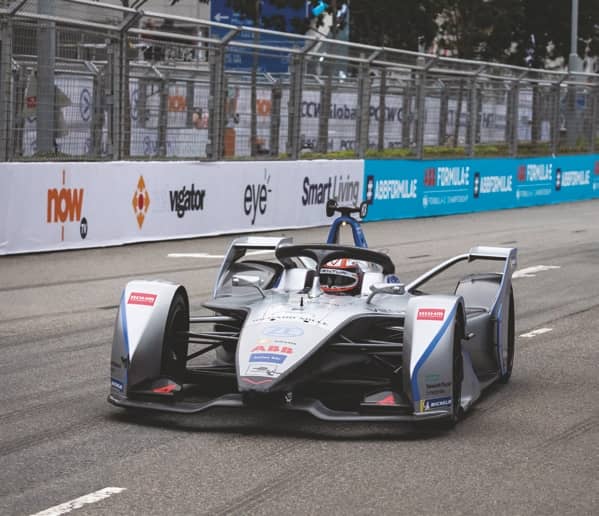 There’s a new pretender to the F1 crown; one that aims to engage a new generation of racers brought up on a diet of videogames. Enter Formula E.

The sound hits you first. Or rather, it doesn’t. For those familiar with the scream of an F1 car, the NutriBullet-style whizzing an all-electric Formula E racer makes as it streaks past the grandstand takes some getting used to.

It’s less a crashing wave of noise and more a gentle sci-fi-flavoured whirring. And it is, quite frankly, a little weird.

Not that the crowd seems to mind much. In the jam-packed stands lining the Hong Kong streets that have been transformed into this makeshift racetrack, the absence of engine noise is more than made up for by the punters. They wave, cheer and shout every time the cars appear, sounding louder with every lap (though that might have more to do with the steady stream of beers being delivered to them in their seats than with the race itself).

Many here will have already taken to social media to nominate their favourite driver; a Hunger Games-style perk system that awards the pilot with the most votes a mid-race ‘Fanboost’ – a blast of power that can be unleashed for a handful of laps to make overtaking easier or to extend a lead.

And they’ll come alive every time a team chooses to activate ‘Attack Mode’; another blast of extra oomph that is unlocked by driving through a slower part of the race track, but which can then be used to make up that lost time, with a significant power increase lasting for several laps.

It’s exactly these video game-style extras, as well as the complete absence of sound, that make fans of traditional motorsport cringe. Purists talk of Formula E as a mere sideshow; a wacky annoyance to be looked down upon in the same way fans of test cricket turn their noses up at brash Big Bash League events.