Silage Fermentation And The Use Of Inoculants 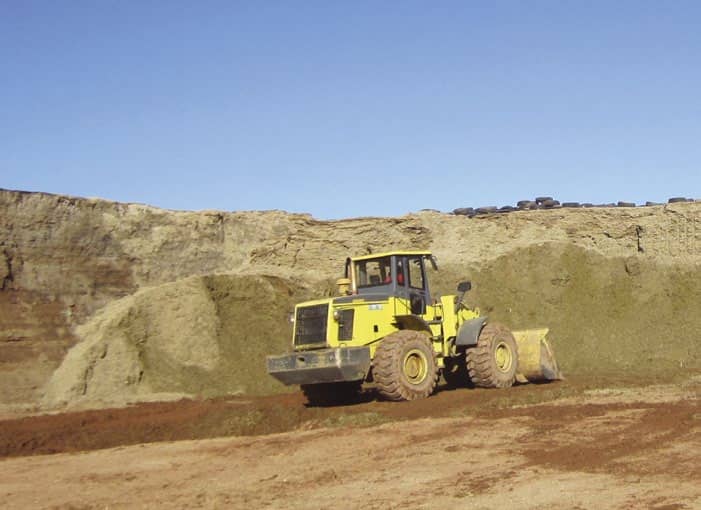 Since the dawn of time there has been a need to provide a good quality supplementary feed source in times when grass or other forage options are limited. In modern agriculture, silage production forms an integral part of most livestock production systems.

The goal of ensiling is to stabilise the crop as quickly as possible through the action of lactic acid bacteria (LAB) to preserve the original plant nutrient composition and to ensure minimal losses. With all the effort and cost involved in growing a good forage crop, you do not want a large quantity (sometimes up to a third) of it to be lost during the ensiling and fermentation process.

The ensiling and fermentation process is driven by microbial (epiphytic) populations found on the crop at harvest. The fermentation process has a significant effect on both the quality and quantity of stored feed that will be available to livestock. This process involves both aerobic and anaerobic bacteria. Fermentation is often divided into six phases, which start from harvest (aerobic) through storage (anaerobic) and ends with feed out (aerobic).

Phase 1 of fermentation occurs from harvest until either all the oxygen has been removed/utilised and anaerobic conditions begin, or the supply of water-soluble carbohydrates (WSCs) is depleted. This phase should take only a few hours under ideal conditions and is driven by cell respiration and aerobic organisms, which utilise sugars to form metabolites. The most notable change during this phase is an increase in temperature due to the production of heat.

Carbon is lost during this phase through gaseous carbon dioxide that is released into the atmosphere (this loss in carbon causes a loss in dry matter [DM] in silage). It is because of this process that management practices at this stage aim to expel oxygen from the storage unit as quickly as possible to reduce DM losses and minimize the growth of aerobic silage spoilage organisms such as yeasts and Bacillus species. If high levels of these organisms are left to grow, they can cause major problems later when aerobic and higher pH environments are restored.

Some of the management factors that help achieve rapid oxygen removal include rapid harvesting, storage filling and sealing; the crop must also be harvested at the correct DM or wilted sufficiently and compacted to the correct density.

Phase 2 begins once the trapped oxygen is depleted and anaerobic fermentation begins. This phase generally lasts between one and three days. Anaerobic bacteria, heterofermentative and enterobacteria, dominate this phase. When these bacteria metabolise sugar, they produce lactic and acetic acid, carbon dioxide and depending on sugar metabolised, they can also produce ethanol or mannitol. They are not very efficient at producing acids relative to the nutrients lost in the fermenting crop.

Enterobacteria can tolerate the heat produced in phase 1 and are able to thrive in a pH ranging from 5 to 7. During this phase, acetate tolerant organisms drop the pH to approximately 5 and this lower pH begins to reduce other microbial activity.

Phase 3 is a transition phase. The LAB that begins to dominate are the homofermentative species, which are more efficient WSCs metabolisers as they can produce two lactic acid molecules from one sugar with no loss of DM (no carbon dioxide production).

Lactic acid is much stronger than acetic acid and can drop the pH of the silage more effectively. This decreasing pH begins to inhibit other bacteria and silage spoiling organisms (e.g. yeasts) and favors the increase of LAB populations. This phase generally lasts around 24 hours and is linked to a drop in both temperature and pH. In terms of understanding and implementing good management practices, these two phases show that you want high levels of effective homofermentative LAB dominating and driving fermentation to ensure high levels of lactic acid production and no DM losses.

Phase 4 is a continuation of phase 3 and is marked by the stabilisation of temperature (usually between 24 to 27°C). Homofermentative LAB primarily dominates this phase with their efficiency depending on the natural epiphyte populations on the crop at harvest, available WSCs, moisture/DM%, and compaction. This phase lasts until the WSCs are depleted or terminal pH is reached; once the terminal pH is reached, the silage is preserved.