For The Love Of Farming 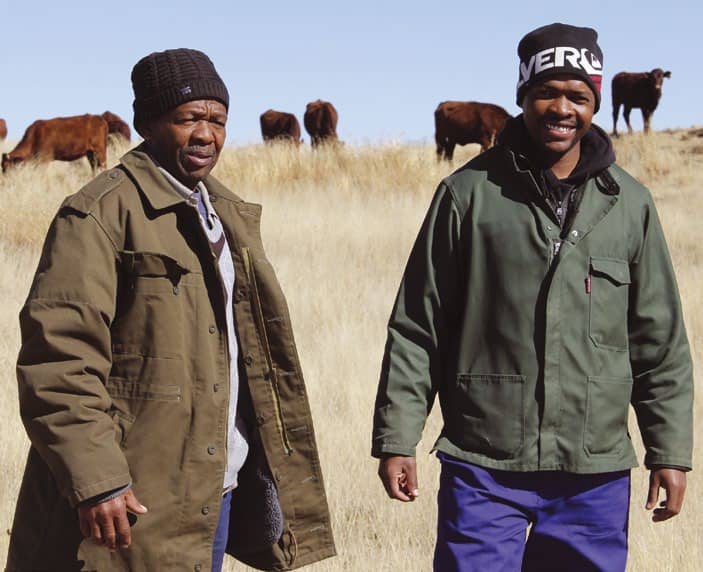 Farming and rearing livestock because you love it is one thing, but without a proper marketing strategy all your efforts will be in vain. This is, however, not the case for the Molotsi family, as their proximity to the Free State town of Steynsrus means they have a market right on their doorstep.

Most of their sheep, goats and chickens are marketed directly to the end consumer, while the local auction provides them with a marketing channel for their cattle. The Sernick Group also has its headquarters nearby, which means that help is just a phone call away.

From bus driver to farmer

Patrick Molotsi and his sons, Nami and Neo, farm on Benoni, roughly 3km outside of Steynsrus. They are dedicated livestock farmers, with a cow herd consisting of 196 animals, some 56 sheep and a few Boer goats and pigs. They also raise broilers that they market in town.

It has been almost ten years since the Molotsis moved to Benoni from a plot near Kroonstad. While employed as a long-distance bus driver for Greyhound, Patrick speculated with cattle until the time finally arrived and he could take the next step – buying a farm. He subsequently left his job and embraced his dream of becoming a fulltime farmer without giving it a second thought.

“Livestock farming is in my blood,” says Patrick, “and everything that I have done in my life so far has prepared me for my role as a fulltime livestock farmer.” Nami shares this sentiment: “I am here because I want to be a farmer.”

The Molotsis have received a lot of help from Sernick, both in terms of training and support. The group has, for instance, assisted them in building a reservoir as well as installing solar panels to pump water from the various boreholes on the farm.

“Sernick has been instrumental in our journey to becoming a viable business. I was one of the first students to be trained by them in 2017, and I buy all our feed and bulls from them. Without Sernick our road to success would have been considerably more difficult,” says Patrick.