With over 1,000 civil aircraft on order, about 400 fighter aircraft and 800 helicopters requirement, besides 5,000 helicopter engines in the next five to 10 years, the aerospace and defence sector is going to boom like never before and the two sectors coming together is but natural.

The Defence Minister Manohar Parrikar inaugurated the 11th biennial edition of Aero India 2017 at Air Force Sta-tion Yelahanka in Bengaluru on February 14. This edition of Aero India, for the first time, combined the defence and civil aviation segments into a holistic event with the involvement of the defence and civil aviation ministries. It is likely that the two biennial events — Aero India which is held in Bengaluru and India Aviation that is held in Hyderabad — will become one, though it has not been officially announced yet.

Parrikar said that this edition of Aero India would witness the emerging dynamism of defence manufacturing in India, especially the rising role of Indian defence industry. He further stated that the government is committed to creating an enabling environment for a domestic ecosystem of defence manufacturing, the results of which were already visible. He added, “The defence public sector undertakings are being revitalised and encouraged. Government has also taken several initiatives for ease of doing business for private firms and additional initiatives are underway to support the role of private sector in defence manufacturing.”

Stating that the government was going aggressive on various initiatives that would prop up the economy, including ‘Make in India’, ‘Start-up India’, the Defence Minister said that the focus had shifted to start-ups, while the government will not compromise on timebound delivery of projects, to ensure that the armed forces modernisation was always on track. 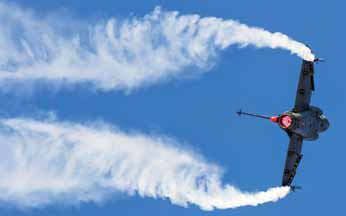 “The government will encourage manufacturing, design as well as innovation in the field of defence manufacturing. Conditions have never been better than now for defence manufacturing in India and I hope it will make way for better technical enhancement,” he said. There would be constant efforts to engage the foreign original equipment manufactures (OEMs), who he acknowledged had contributed significantly to enhancing India’s aerospace and defence capabilities. The government, he said, was taking measures to ensure that ease of business would improve to enhance investments, not only domestic but also international, in these sectors.