MORALE BOOSTER BY THE CHIEF OF THE AIR STAFF, IAF 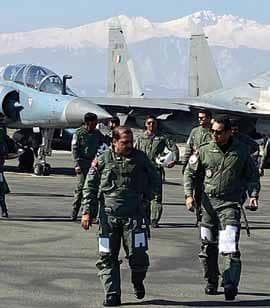 “The development on the Line of Actual Control in Ladakh is a small snapshot of what we are required to handle at a short notice”, said the Chief of the Air Staff.

ON SATURDAY, JUNE 20 THIS YEAR, WHILE ADDRESSING THE Combined Graduation Parade at the Air Force Academy at Dundigal, as the Reviewing Officer, Air Chief Marshal R.K.S. Bhadauria, Chief of the Air Staff (CAS), Indian Air Force (IAF), delivered a morale boosting speech to the flight cadets passing out on completion of their pre-commission training that is indeed rigorous.

A Combined Graduation Parade is held at the Air Force Academy every six months to mark the entry of young men and women as commissioned officers into the flying as well as all other ground duty branches of the IAF. Under normal circumstances, this land mark event is witnessed by the parents and guardians of the passing out flight cadets as well. However, this year, quite unfortunately, owing to the COVID-19 pandemic and the paralysis gripping the nation, the parents and guardians of the flight cadets passing out were deprived of this privilege. Consequently the Combined Graduation Parade on June 20, 2020, in which 123 air warriors including 19 women, received the President’s Commission, turned out to be a relatively low key affair.