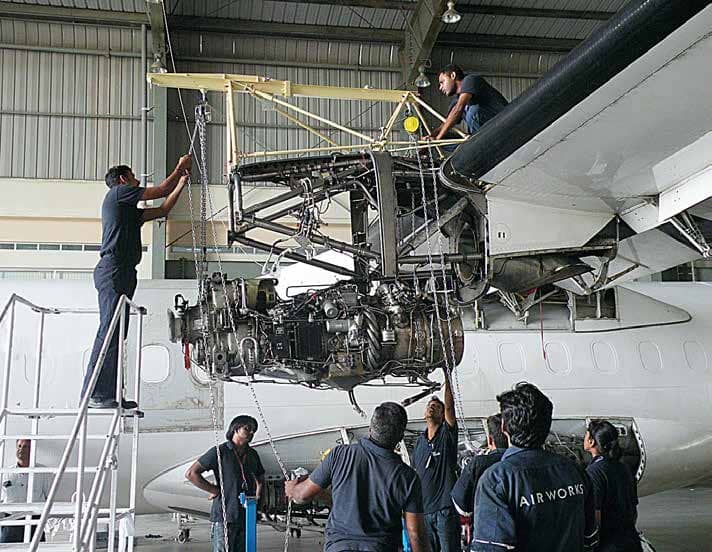 INDIA IS MOVING FORWARD TO BECOME THE WORLD’S THIRD-LARGEST civil aviation market by 2024. Currently, major airlines connect 103 operational airports within the country and many more across the globe. Despite the RCS-Udan scheme, India’s aviation industry is largely untapped with huge growth opportunities. The Indian government is planning to invest $1.83 billion for the development of airport infrastructure along with aviation navigation services by 2026. India’s total passenger traffic stood at 199.60 million in the period April to October 2019, with 1.5 million aircraft movements. The Mumbai-Delhi air corridor is ranked the world’s third-busiest route. Total freight traffic for the same period was two million tonne. There are 604 aircraft operated by scheduled airline operators in India. Airlines in India spend about 13 to 15 per cent of their revenues towards maintenance – the second-highest cost item for airlines after fuel. Generally, airlines carry on-tarmac inspections (A and B checks) in-house and work with third-party Maintenance, Repair and Overhaul (MRO) for engine, heavy maintenance (C and D checks) and modifications.

On January 15, 2019, the Ministry of Civil Aviation (MOCA) released a report titled ‘Vision 2040’, outlining a roadmap for the future of civil aviation in India. The report projects that air passenger traffic will increase six-fold to 1.1 billion passengers by 2040 and by then 2,359 passenger aircraft would be required. Air cargo movement will quadruple to 17 million tonne by 2040. The number of airports in India would rise to around 200. The government proposed creating a $2-billion fund to help support low-traffic airports. India targets to establish an aircraft manufacturing base by 2040.

According to the Department of Industrial Policy and Promotion (DIPP), Foreign Direct Investment (FDI) inflows in India’s air transport sector including air freight, reached $1,904.37 million between April 2000 and June 2019. The government allows 100 per cent FDI in the air transport sector. However, FDI over 49 per cent would require government approval. For Non-Resident Indians (NRIs), 100 per cent FDI will continue to be allowed under automatic route. This has now been allowed in ‘Brownfield Airport’ projects as well. India’s aviation industry is expected to witness ₹35,000 crore ($4.99 billion) investment in the next four years.

Currently, North America is the largest MRO market, accounting for around 40 per cent of the world market. Asia-Pacific, China and India combined represent 22 per cent of the market. However, India handles only one per cent of the global MRO business. Total MRO expenditure is expected to rise to $116 billion by 2029, up from $81.9 billion in 2019, as per the Global Fleet and MRO Market Forecast 2019-2029 by Oliver Wyman’s Aviation Competitive & Market Intelligence team. China, with its 300 MRO companies, generated over $3.0 billion of its nearly $7-billion MRO requirement in 2019. China offers tax breaks, better infrastructure, cheaper labour and a bigger market. China’s fleet of commercial aircraft stands at 3,376 which is over five times India’s fleet of 604. These numbers will grow to 7,209 and 1,547 respectively by 2029. The Indian MRO market will grow from the current $2 billion to $4 billion. Singapore has had a viable MRO industry and spare parts base for many global civil aircraft players. Thailand is also emerging as an MRO base. The Indian industry has good models to emulate in the Asian neighbourhood. The revenue from aircraft heavy maintenance and modifications has the second-highest share. In India, very few companies provide heavy maintenance service. One day, India’s defence MRO business should also flow to Indian private players.

Private non-scheduled operators are required by the Directorate General of Civil Aviation (DGCA) to set up a CAR 145-approved maintenance shop or work with a DGCAapproved third-party MRO. Most private operators prefer the outsourced model for line maintenance (on-tarmac checks) and use OEM/DGCA-approved facilities for engine, heavy maintenance and modifications on their aircraft. The Indian business aviation market is complex from a maintenance perspective as it has over 60 different aircraft types operating in a total market of about 350 aircraft (business jets, turboprops and helicopters). Each individual type requires trained technical manpower, tooling and approvals from regulator as well as the OEM to enable an MRO to offer world-class maintenance services.

The Indian MRO market is currently estimated to be around $800 million and is growing at about eight per cent annually against a four per cent world average. A recent Ernst & Young study reveals that Indian MRO market growth rate will go up to 15 per cent. With India’s growing aircraft fleet, it is cost-effective for domestic airlines to have their aircraft serviced within the country. The increasing age of Indian aircraft, both civil and defence, requires frequent maintenance.