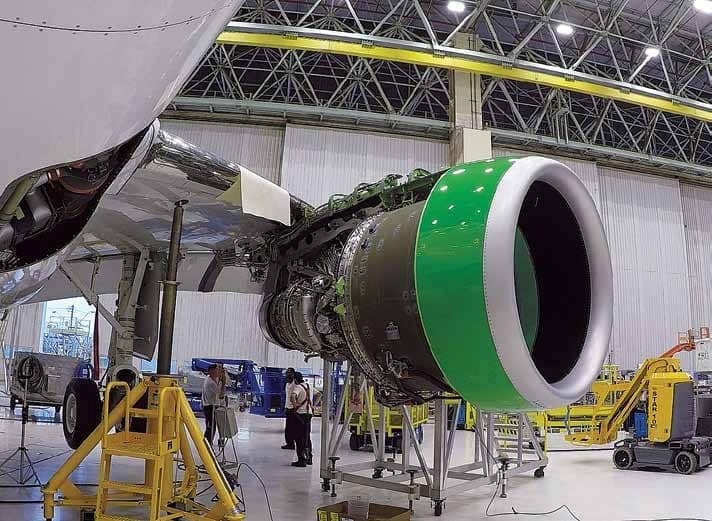 Bio-fuel technologies, driven by the dual motivations of fossil fuel depletion and climate change imperatives, are progressing at a rapid pace. The technological feasibility of using bio-fuels in aircraft engines has already been demonstrated amply. It is only a matter of time before the cost of bio-fuels, which is around three to four times that of equivalent fossil fuels, is brought down by technological innovations to lower than that of fossil fuel. Changes to existing internal combustion jet engines to switch over to bio-fuel would be minimal and easily achievable.

IN RECENT MONTHS, spectacular advances have taken place in the technology-intensive arena of aircraft propulsion. The world’s largest aero engine ever, the GE9X, completed its flight tests on a specially modified Boeing 747 and is now being geared up to be test flown on Boeing 777-9 for which it is intended. The GE9X has a fan diameter of 134 inches. To put it into perspective, its diameter is more than twice that of the CFM56 family that powers a majority of the world’s single-aisle, narrow-body commercial aircraft families of Airbus A320 and Boeing 737. The other remarkable event was the test flight of Ampaire 337, the highest capacity hybrid electrical aircraft ever flown. Originally a twin-engine Cessna 337 Skymaster, the aircraft was retrofitted with the replacement of one of the internal combustion engines with an electric motor, resulting in a parallel-hybrid propulsion system. While the GE9X is a momentum-driven progression of internal combustion engines that guzzle up Aviation Turbine Fuel (ATF) in proportion to their size/ thrust, the Ampaire 337 is part of a technological campaign to find an alternative to ATF.

Two motivations drive the electric aero engine quest – the need to conserve finite fossil fuel reserves and the pressure of reducing the effect of aviation-related emissions on climatic change. All internal combustion engines, jet, turboprop or piston, burn fossil fuels. However, there are now programmes and projects in place to produce equivalent fuels from biological sources, but commercially viable bio-fuels are still some distance away in time while fossil fuels are being depleted at an alarming pace. As far as the correlation between aviation fuel consumption and emissions is concerned, an Intergovernmental Panel on Climate Change (IPCC) working under the auspices of the United Nations Environment Programme (UNEP), monitors climate change and has computed that air transportation contributes to the 4.9 per cent of human-caused climate change, including emissions of CO2 and other Greenhouse Gases. ATF is the largest contributor as it is used by jet engines which are the majority of aircraft engines and also because it gives out a lot of CO2 during its combustion inside the engine. Thus, there exists a need to seek advances in aircraft propulsion from the point of view of both – fossil fuel conservation and the adverse impact on the environment due to its combustion. 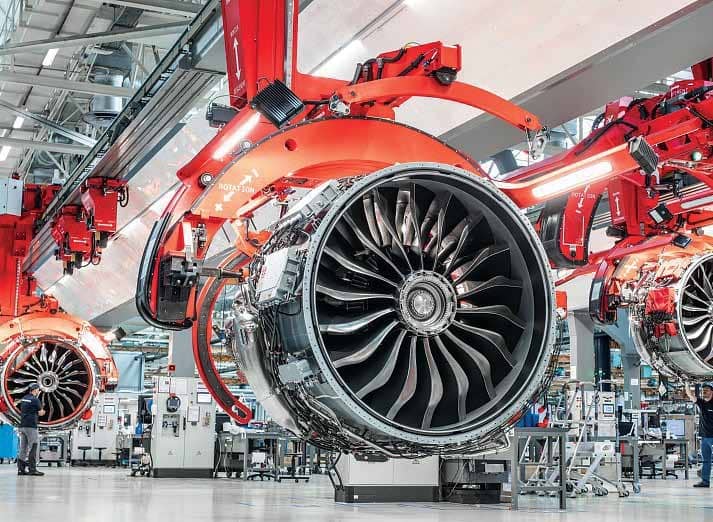 INTERNAL COMBUSTION LEGACY. As fossil fuel reserves get depleted at a disquieting pace, there is pressure on engine Original Equipment Manufacturers (OEMs) to innovate for engines with lower Specific Fuel Consumption (SFC) which is the ratio of fuel consumption per unit time (in kg/hr) to power produced by engine (in kWh). However, engine design is dictated by the prospective aircraft or aircraft family that it is meant for. Approximately two-thirds of all commercial airliners lies in the single-aisle, narrow-body segment and this is where significant engine advances have occurred over the past decade or so when the antagonistic competition between Airbus and Boeing in this segment has been intense.

The existing aircraft families, A320 and Boeing 737 respectively, have been stretched and fitted with more and more powerful engines until a decision point was reached. The choice was between designing a new aircraft to bridge the gap between narrow-body and wide-body, against enhancing existing designs of the two families. This choice became necessary as the incremental changes to the two families were becoming smaller and smaller and both the contenders were in search of substantial improvements to their aircraft.

In 2010, Airbus announced its decision to re-engine the existing A320 family, introduce some design features to reduce fuel consumption and reduce weight through use of composites. The enhanced version of the aircraft was called the A320neo (new engine option). Boeing was less enthusiastic about the concept and had been thinking of a new aircraft to fill the gap between the narrow-body and the wide-body space since 2006, but was forced to follow suit with a decision in 2011 to introduce its own family of 737 MAX aircraft. The favouring of the decision to re-engine over the risk of developing a new, expensive aircraft was termed by some analysts as the ‘Age of Incrementalism’ and was largely driven by technology promising reduced fuel consumption. The lure of cost savings, as can be expected, enticed airlines all over the world to order neos and MAXs.

Variants of CFM’s Leap engines power the family, Boeing 737 MAX versions and the Chinese Comac C919. The Leap engine architecture was selected after a deep study of eighteen different engine architectures including geared fans, counterrotating and unducted fans, and a direct-drive single-stage design such as the one used in CFM56 which is possibly the world’s best selling engine. CFM’s competitor Pratt & Whitney (P&W) has been studying new versions of its Geared Turbo Fan (GTF) which it calls “the future architecture of choice for commercial aviation” and which already powers A220s, A320neos, Embraer E-Jets E2 and in-development Mitsubishi Aircraft MRJs and Irkut MC-21s.