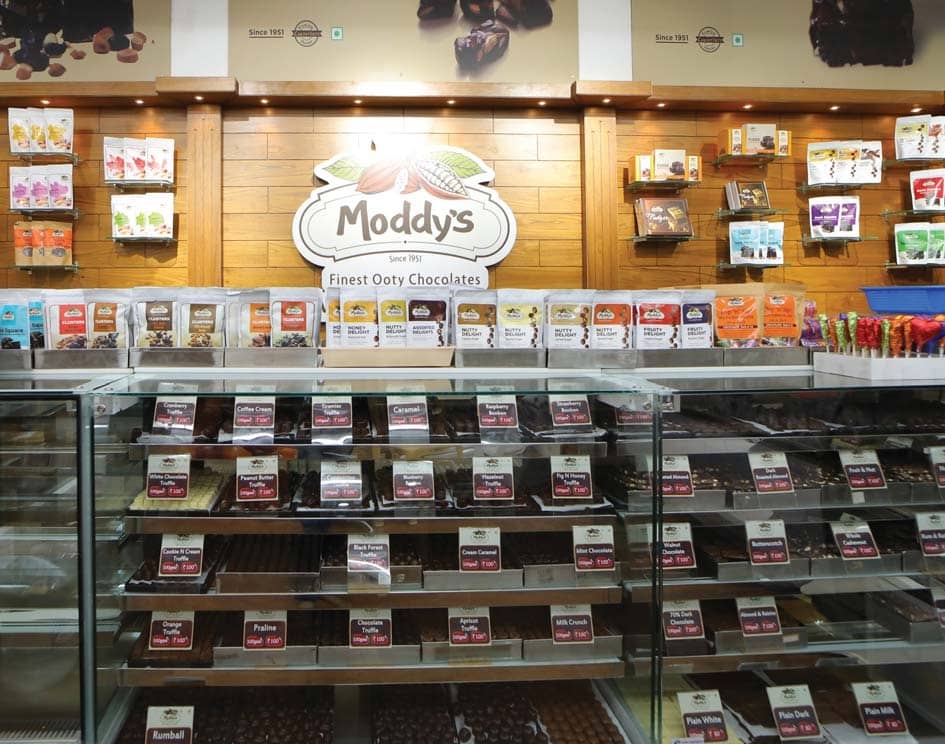 Nestled amidst the lush Nilgiris in the picturesque hill station of Ooty in the southern State of Tamil Nadu, Moddy’s Chocolates aka Modern Stores started out as a kid’s goodies store in 1951 before taking an evolutionary leap as a landmark grocery outlet specializing in chocolate, confectionery, bakery, ice cream and assorted products.

In 1951, Mangalore born Janardhan Rao invested Rs.3000 to set up a 40 sq.ft. store in the Nilgiris hill-station of Ooty. He named the shop Modern Stores and it started out selling speciality products, imported cigarettes, candles and chocolates.

Ooty was then a typical British regimental town with a very distinct culture. Flanked on all sides by the rolling Nilgiris, the small town had a profusion of missionary educational institutes and a sizable British settlement.

The town’s demographic profile proved to be a right fit for the up-and-coming Modern Stores. The Western clientele served as the right target audience for the fledgling store. It managed to generate sufficient custom, which prompted a fresh expansion of the shop across 400 sq. ft. of retailing space at Ooty’s Ettines Road.

Around the time Modern Stores was spreading its wings, the butlers who were in the service of resident British settlers sprang on Janardhan the idea of starting an English confectionery section at the store. Acting on this piece of advice, a makeshift mini production unit was set up behind Modern Stores. And with the help and expertise of the butlers, Modern Stores started making high quality chocolates, which became a runaway hit with the locals.

In the year 1972, Janardhan made another move at expanding his Modern Stores – this time to a 600 sq. ft. space at Ooty’s Commercial Road and where he also introduced a bakery section within 200 sq. ft. of the new shop.

The butlers who had earlier advised and helped Janardhan to set up the confectionery section once again came to collaborate. This time around, they helped to create innovative signature recipes such as the Jap cake, which remains a hot seller at Modern Stores to this day. The bakes and chocolates retailed at a price point of Rs.150-Rs. 200 per kg and the products were eagerly lapped up by the residential schools dotting the city.

The Making of Moddy’s Confectionery

It was a challenging phase in the retail journey of Modern Stores but the odds inspired Muralidhar to join his mother and chip in with chocolate making. “Before leaving for school and after coming back home, I would help out my mother in making chocolates. I carried out this routine every day until I joined college. All through this period, the one thing we adhered to and followed strictly from day one was to make sure that the quality of our chocolate was superlative. My Dad was clear that if we were selling chocolates then these had to be proper and good quality chocolates! We made sure that we didn’t use any vegetable fat or synthetic products in our chocolate,” recounts Muralidhar.

With his chocolate making passion set, Muralidhar decided to go to Italy to learn and master the craft of chocolate making. On coming back to India in 2000, he joined his father’s business but with a long-term plan in mind. The young entrepreneur had crafted a blueprint to take the family business to greater heights.