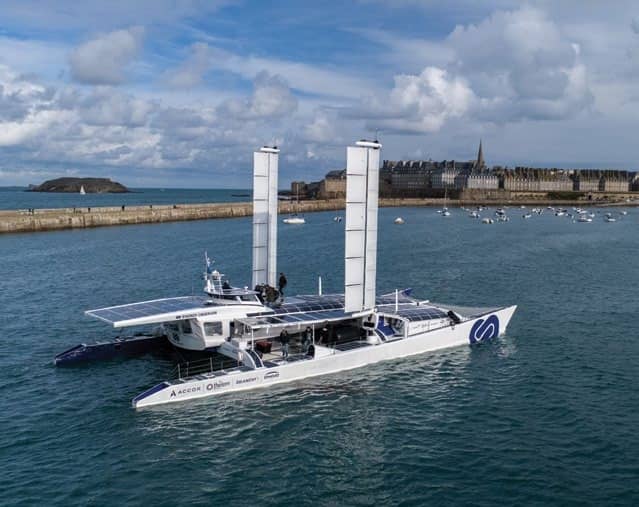 Wind has never been entirely dead. But now that we have realized the ecological consequences of burning fossil fuels, and the International Maritime Organization (IMO) has imposed binding global emission restrictions, wind-assisted shipping is attracting attention again. Two French companies have shown how to use aerospace technology to double the propulsion power of wind.

The physical principle is the same one humans have used on sailing boats since eons ago: The wind hits the leading edge of the sail and splits into two flows that are redirected and travel at different speeds toward the trailing edge, causing a pressure difference that simultaneously pulls and pushes the sail and the craft forward. What has changed is the efficiency. Advanced science has doubled the amount of propulsion power per square meter of sail surface, said Marc Van Peteghem, naval architect and co-founder of VPLP Design. Together with the French engineering firm CNIM, VPLP has developed a new wing sail concept they call OceanWings, based on an existing VPLP idea.

From plane to ship

In recent years, a number of attempts have been made to combine the propulsion principle of traditional sailing boats with the aerodynamic efficiency of an airplane wing with the trailing edge flap extended for taking off or landing. “There is a slot between the two elements of the wing, and the air going through the slot accelerates the flow and pushes the turbulence toward the trailing edge,” Van Peteghem said.