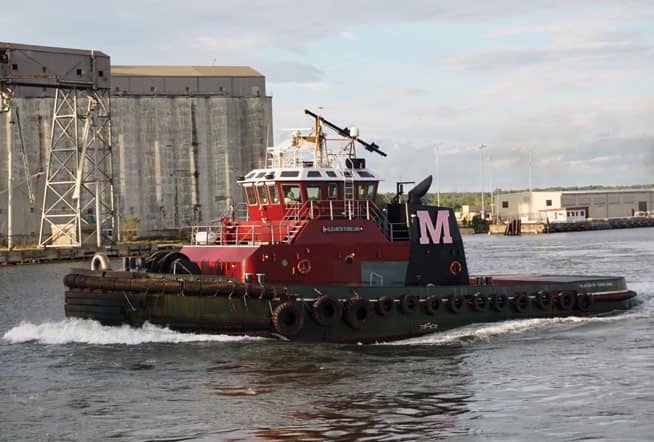 James A. Moran idled alongside an empty bulk carrier moored in South Carolina’s Cooper River as an aluminum skiff zipped back and forth, releasing the ship’s mooring lines.

Soon the bulker was free, and the 6,000-hp tug on its starboard quarter held the vessel in place as the wind and current nudged the hull.

The job of holding, and eventually turning, River Pearl was the first of two back-to-back jobs for James A. Moran and its 6,140-hp, 110-foot counterpart Elizabeth Turecamo. James A. Moran pushed away from the North Charleston container port about an hour earlier on a sunny, warm fall afternoon and headed northeast.

The midstream mooring field occupied by River Pearl and another bulker lay less than a mile ahead in a quiet stretch of the Cooper River well north of Charleston’s historic downtown. For much of the previous week, the 618foot River Pearl offloaded scrap metal onto barges. Those vessels in turn carried the cargo to its final destination at the Nucor Steel Berkeley mill about 10 miles farther inland. 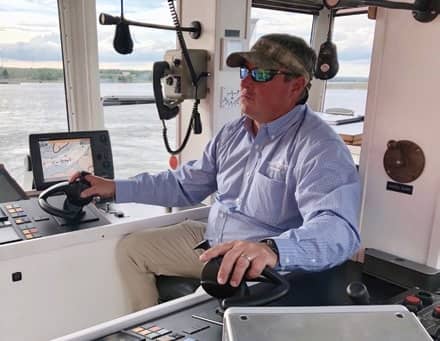 Midstream moorings like this one operated by Maybank Industries are common on the Mississippi River but something of a rarity in big ports like Charleston. These facilities require a completely different process for tying up and releasing mooring lines. Crews aboard small skiffs set the lines, or release them depending on the circumstances, from buoys fore and aft of the ship.

Line handlers from Moran Environmental Recovery stood by as James A. Moran transferred docking pilot Warren Tawes and Charleston Branch pilot Doug Logan aboard River Pearl. From there, McGuire circled back around the ship and got a line on the port quarter. One by one, crews freed a line then zipped to the opposite side to release a corresponding rope.

With all of the lines clear, Tawes gave a series of tugboat engine orders to begin spinning the bulker’s bow 180 degrees from north to south. Elizabeth Turecamo pulled back on the starboard bow, while James A. Moran pulled on the port quarter. The empty bulker, drawing just 17.5 feet, offered little resistance. It dutifully swung around in what seemed like a matter of seconds, with neither tug expending more than 30 percent power.