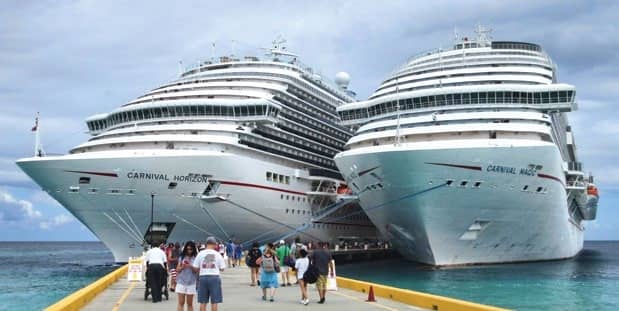 Ineffective communication between the docking pilot and the master of a Carnival cruise ship was the primary cause of a 2018 pier strike in New York that caused $2.5 million in damage, according to federal investigators.

The National Transportation Safety Board (NTSB) also highlighted a perceived lack of engagement among bridge crew in the minutes before Carnival Horizon’s bow struck Pier 90 in Manhattan. The incident occurred just before dawn on Aug. 28, 2018, as the ship turned almost 90 degrees to dock starboard side-to at Pier 88. Shoreside facilities sustained most of the damage.

“As the ship continued to maneuver to the berth and rotated clockwise around the end of Pier 88, the bridge team and pilot progressively lost awareness of the vessel’s headway toward the end of Pier 90,” the NTSB said in its report.

“The pilot was focused on reducing the vessel’s rate of turn to starboard, while the ship was still moving forward toward Pier 90,” the report continued. “The closing distance went undetected or unchallenged by the bridge team until the ship was so close to the pier that no maneuver could have prevented the impact.”

The position of the third officer serving as a forward lookout contributed to the incident, the NTSB said. The officer alternated between starboard and port mooring platforms that did not offer a clear view of the bow. Carnival now positions a crew member at the bow to gauge distances when docking at the Manhattan Cruise Terminal.

In a prepared statement, Carnival acknowledged the NTSB determination. “We have reviewed the NTSB report and will be using these findings as the basis for procedural recommendations and training,” company spokesman Vance Gulliksen said.