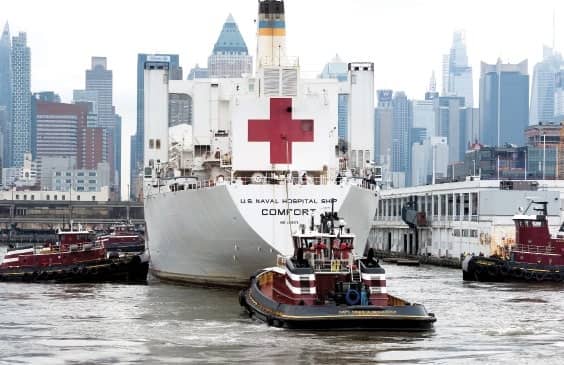 With much of the United States shut down due to the COVID-19 pandemic, mariners and port employees keep working, but in a radically different environment. Crew changes and visits to vessels must be done with numerous safety precautions. Personal hygiene onboard has become paramount.

“We are treating personal hygiene guidelines like safety practices,” said Jim Weakley, president of the Lake Carriers’ Association. Failure to follow the new rules is handled like a violation of safety codes before the pandemic.

Guidelines posted on the Seafarers International Union website March 20 stated that crew changes would be suspended for 30 days, with relief crew decided on a case-by-case basis. Personnel designated as “essential,” such as repair teams, are allowed on board, according to union spokesman Jordan Biscardo.

Along with U.S. Coast Guard guidelines, companies have been issuing their own specific sanitation and hygiene rules to protect crews on vessels, which sometimes differ from company to company (see sidebar on page 6). Even more challenging, federal, state and local entities are often at odds as they struggle to cope with COVID-19.

“I wish I could say that they all talk to each other and (have) one unified voice, but this is new to everybody, and they’re all trying to figure it out,” said Sean Kline, director of maritime affairs for the Chamber of Shipping of America.

Despite initial challenges, Caitlyn Stewart, director of regulatory affairs for the American Waterways Operators (AWO), said that the maritime world was working fairly well as of early April.

“I hesitate to generalize because there are things that folks are dealing with that are very much outside of the norm,” she said. “This is not business as usual, but there needs to be business continuity.”

Of the problems facing the industry, the biggest one is ensuring that crew changes are conducted as scheduled.

“We’ve asked the question directly to (U.S. Customs and Border Protection),” Kline said. “When there’s a shelter-in-place order, and mariners are essential, we’re still having issues with getting mariners off the ships. They have been on ships well past their due date. That leads to complacency, fatigue and potential safety issues.”

The Coast Guard issued a marine safety information bulletin on March 18 stating that port facility operators are not allowed to prevent crewmembers from leaving or boarding a vessel. It is up to the Coast Guard or Customs and Border Protection (CBP) to determine if that has occurred.