High water in Vicksburg: Another bridge strike, another breakaway 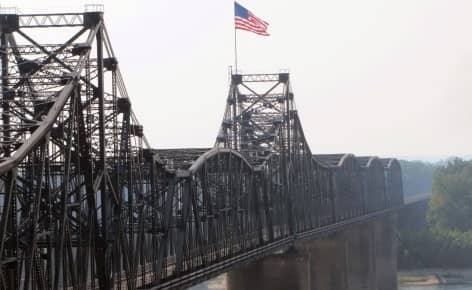 Pilot error was the primary cause of a bridge strike in Vicksburg, Miss., during high water in February 2019 that caused 30-grain barges to break away, according to federal investigators.

The 10,000-hp, twin-screw Chad Pregracke was downbound with its tow when at least one barge hit Pier 3 of the Old Highway 80 Bridge. The impact occurred at 0704 on Feb. 27 when the Lower Mississippi River was in flood stage. One barge sank and three others were damaged.

National Transportation Safety Board (NTSB) investigators determined that the pilot helming the 3-year-old vessel misjudged how the current would affect the tow after navigating around Delta Point, about a mile upriver from the bridge. The tow measured 210 feet wide and 1,173 feet long in a six across, five-long configuration.

“Although the tow configuration and the pilot’s high-water experience met the Coast Guard’s recommended guidelines for mitigating the risk of a bridge strike, the pilot could not overcome the effect of the current on the tow,” the NTSB report said.

Marquette Transportation operates the towboat, which at the time of the incident was owned by the U.S. Bank National Association. The company did not respond to a request for comment.

The pilot at the helm was not identified. However, the NTSB said he had 18 years of experience operating tows on the Mississippi River and had developed a specialty working in high water. He passed through the Vicksburg bridges — the 89-year-old Old Highway 80 Bridge and the Interstate 20 Bridge — without incident two weeks earlier.