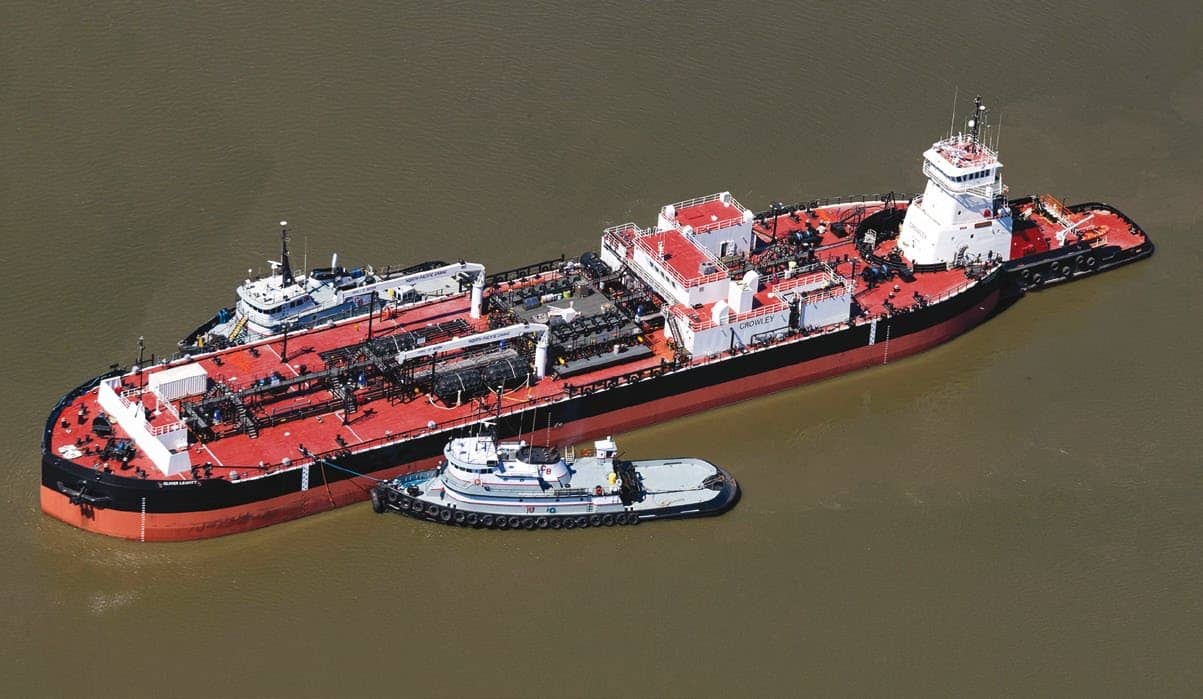 Alaska has notoriously challenging weather conditions and climate. Crowley Maritime built an articulated tug-barge (ATB) rugged enough to safely sail through these icy waters and nimble enough to steer itself into berth.

The 128-foot Alaska-class tugboat Aveogan is paired with the 100,000-bbl Oliver Leavitt. The tug and barge pair up through an Intercon C-Series coupler with a first-of-its-kind “modified wave” lightering helmet to allow for ship-to-ship transfers. Propulsion comes from twin 3,384-hp GE Tier 4 engines paired with Schottel z-drives.

The double-hulled ATB meets both ABS Ice Class and IMO Polar Code standards. The tug is equipped with a closed-loop ballast system that transfers water between the tugboat and barge as the tugboat burns fuel. Oliver Leavitt is outfitted with spill response equipment to protect Alaska’s pristine waters and coastlines.

Crowley Shipping’s petroleum services group will operate the ATB for Crowley Fuels Alaska. Jensen Maritime Consultants designed the ATB, and Bollinger Shipyards built the vessels at its Louisiana yard. Petro Star Inc., based in Anchorage, chartered the vessels for Crowley to carry fuels to some of Alaska’s most remote communities, including Dutch Harbor, located 700 nautical miles from Anchorage.

“It is a very capable ATB,” said Lev Yampolsky, Petro Star’s vice president of logistics and terminal operations. “The capabilities we will get with this ATB from Crowley are things we are very excited to see: the ability to move fast, switch cargo and quickly prepare the barge for different cargo configurations. That is going to give us good operational flexibility.”

Aveogan is named for Oliver Leavitt, a former chairman of Arctic Slope Regional Corp. (ASRC) and a current member of the company’s board of directors. Aveogan is Leavitt’s Iñupiat name. ASRC is an Alaska Native corporation that acquired Petro Star in 1987, three years after it launched.

Petro Star operates two refineries — one in Valdez and the other near Fairbanks — that make jet fuel, heating oil and other refined products for the Alaska market. Its commercial distribution arm uses ATBs to deliver fuels to hubs like the Port of Alaska in Anchorage, as well as the far-flung fishing outpost on St. Paul Island. Petro Star also supplies U.S. military jet fuel in Alaska. 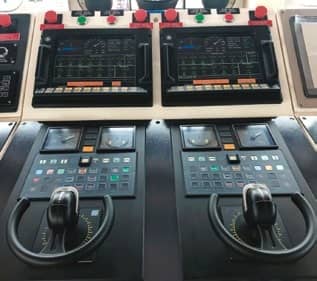 Crowley subsidiary Jensen Maritime of Seattle designed Aveogan and Oliver Leavitt to work in Alaska’s challenging environment. Its naval architects used computational fluid dynamics to optimize the hull form for efficiency while underway, according to Jay Edgar, Jensen’s vice president of engineering. The work paid off: Aveogan and Oliver Leavitt should maintain at least 10 knots when pushing a loaded barge.

Speed is a huge advantage when working in a state as big as Alaska. “If you think about the map and the ability to go 1 to 2 knots faster, over 1,000 miles, it adds up,” Yampolsky said.

Designing Oliver Leavitt to ABS Ice Class D0 standards required additional framing and thicker hull plating at the bow to withstand first-year ice. The 400-by-85-foot barge is beamier than barges with similar capacity to maintain a shallow draft required in some parts of coastal Alaska. Its maximum draft at full capacity is 22 feet.