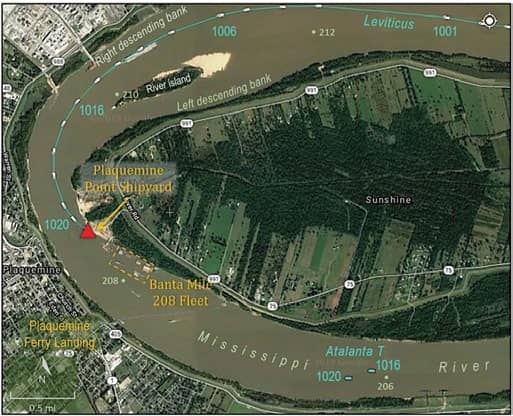 A towboat pushing six barges down the Lower Mississippi River struck moored barges at a shipyard near Sunshine, La., causing 11 empty shipyard barges to break free. An apprentice steersman had turned over the helm just before impact.

The incident happened at about 1020 on March 7, 2019, at mile 208.5 as the towboat Leviticus prepared to meet an upbound tanker. Chem Carriers’ Plaquemine Point Shipyard used the 11 barges for vessel cleaning and repair work. Ten shipyard workers suffered minor injuries.

National Transportation Safety Board (NTSB) investigators said the head of Leviticus’ tow became mired in an eddy in a challenging bend at Plaquemine Point. The agency said a trainee steering the tow lost control as it approached the shipyard.

The captain’s decision to allow the trainee to navigate the challenging section of river while it was in major flood stage was the primary cause of the incident, the NTSB said.

“The captain did not realize the tow was caught in an eddy and headed toward Plaquemine Point Shipyard until less than a minute before the accident,” the agency said in its report, noting that by then it was too late to avoid the impact.

The captain, four days into a 28-day rotation, tested positive for marijuana metabolites during a post-accident screening. Vessel owner Kirby Inland Marine immediately fired him and the Coast Guard revoked his license. A Kirby spokesman did not respond to an inquiry about the incident or the NTSB findings.

The 4,600-hp Leviticus had a tow loaded with crude oil in a two-wide, three-deep configuration on the morning of the accident. The captain, who the NTSB did not identify, had 25 years of maritime experience. He had trained 10 steersmen for Kirby during the previous seven years. The trainee steersman at the helm during the incident was a 2017 graduate from a maritime academy.