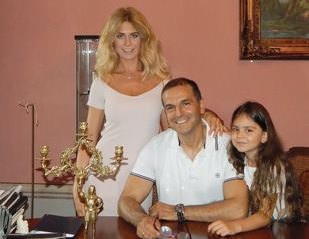 We control our surroundings in so many ways that we sometimes forget it’s a two way street: our environment shapes us, too.

Take Giovanni Santini as an example. The fact that he was born 55 years ago in Turin, Italy, explains a great deal about his career in pens, for this area is the historic seat of Italian pen making. Turin is the home of Aurora (see p. 68) and not far from the home of Ancora, two of Italy’s oldest brands, both founded in 1919. Settimo Torino (a town seven miles outside Turin—hence its name—but now more like a suburb) was once home to scores of fountain pen manufacturers.

So it was the most natural thing in the world that Santini would gravitate to pens. He attended an arts college, shaping models and creating drawings and also studying architecture and art history. After college, he tried several jobs before opening a stationery shop, and that’s when he truly fell in love with pens. He soon began selling and repairing fountain pens, and a Waterman salesman led him to the next step of his career: he told Santini about a well-known pen shop in Turin that was for sale. “That was my dream by then,” says Santini. “I didn’t wait a moment and bought it!”

The shop, which had been established in the 1950s, came with a stock of vintage spare parts and materials, including ebonite, celluloid, lever-fill mechanisms, nibs, and tools, many of them handmade by the previous owner. Santini built his skills in pen repair, began collecting mostly Italian pens, and attended pen shows in the United States.

Ancora had stopped producing pens in 1975, and Santini saw an opportunity not only to create his own pens but also to bring back an important part of Italy’s fountain pen history. He bought the dormant brand in 1998, and the first pen he produced there was the Unica. “A pen made by me! The dream came true!” Santini marvels.