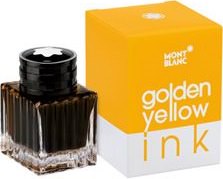 The Maison has a series of standard and limited edition inks for all your writing needs.

In an August 2016 article on cursive writing for PenWorld (p. 10, “The Cursive Comeback”) Jerry Ceppos, Dean of the Manship School of Mass Communication at Louisiana State University, quoted Louisiana State Senator Beth Mizell’s remarks that today’s students yearn for individuality. “There are kids who tattoo and pierce. They love anything that makes them distinctive. There’s nothing more distinctive than a signature,” she said.

I am constantly amazed at how frequently I get comments from people who receive handwritten letters on beautiful stationery, especially social letters for special occasions written with colorful inks and a well-made nib. For example, anyone who has received a card or letter from calligrapher Ward Dunham will know how they immediately attract favorable attention (“The Magical Italic Nib,” PW April 2014).

An intriguing poster in my local post office that says “Stamps Add Style” made me think of how coordinating different colors of ink, nibs, writing papers, and even postage stamps makes a psychological impact. I was reminded of an article in the Miami Herald several years ago which mentioned that parents of school children in New York City complained that red ink used by teachers to correct student papers was “aggressive and intimidating.” Analyze This: What Handwriting Reveals, by British handwriting analyst Allan Conway, discusses the psychological impact of various ink colors (reviewed in the August 2012 issue of PW). Particularly striking to me is his mention that people who use brown ink are “most trustworthy.”