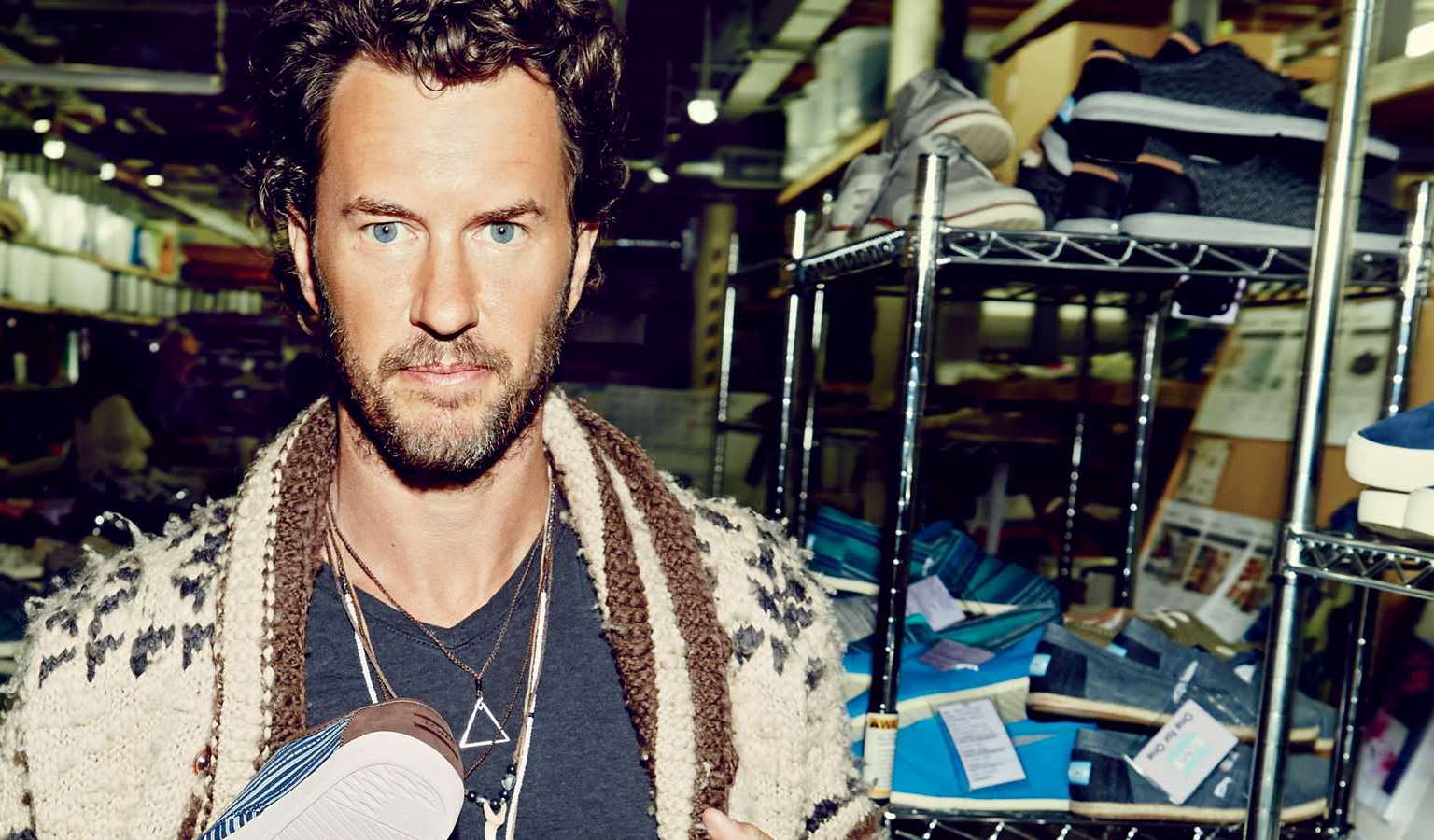 When he founded Toms, Blake Mycoskie reinvented the idea of a company that does well while doing good. So what’s next for him? Doing that again.

BLAKE MYCOSKIE IS THE MOST relaxed intense person you will ever meet. Two days after this year’s Academy Awards, Mycoskie sits in his world-bazaar-flavored office, one leg hooked over the arm of a chair, sipping sparkling water and munching almonds from Whole Foods. He seems recovered from the Oscar parties (Vanity Fair, InStyle) and ill-timed caffeine cleanse that left him yawning in meetings the previous day. At the ceremonies, his company, the virtuous shoe business Toms, took home what amounts to the statue for Best Publicity. During the broadcast, AT&T debuted an ad extolling Toms’ growth and ethos of giving.

And Abraham Attah—the 15-year-old co-star of Beasts of No Nation—turned up for his presenter’s gig shod in a pair of the company’s signature alpargata slip-ons, made specially for him from embroidered black velvet.

As Attah explained to red-carpet interviewer Ryan Seacrest—another Toms admirer—the business won him over by promising to donate 10,000 pairs of shoes to his native Ghana. It was a one-off escalation of Toms’ famous one-for-one model: Every time a consumer buys one of its products, the company donates a related product or service to someone in need. (In Toms-talk, such donations are “gives.”) Toms sealed the deal with Attah four days before the Oscars in a last-minute scramble. At the time, Mycoskie was incommunicado at the Hoffman Institute, a personal-transformation retreat. Right before that, he’d been in Colombia, delivering shoes to poor children.

“Everyone was like, ‘Blake, we have this massive thing happening and you are checking out for nine days,’ ” says Mycoskie, 39 and youthfully scruffy in the best Bradley Cooper way. On this day, he is wearing green-gray harem pants (he has several pairs in various colors) and a triangle necklace to commemorate the birth of his son, Summit. Among the wrist-load of bracelets he’s collected in his travels is a new one, made for him at Hoffman. It looks like a coin and says “Present.” When everything you encounter is a springboard to new ideas, being present is something you have to work at.

In the 10 years since he founded the Los Angeles–based Toms—whose revenue for the 12 months ending last June 30 was estimated by Moody’s to be $392 million—Mycoskie has accumulated enough karmic capital to disappear for a week or two in pursuit of spiritual healing. His for-profit company has brightened more than 51 million lives with new shoes, restored vision, clean water, and safe births. Whoever writes the four-decade history of for-profit social ventures will devote a chapter to Toms’ pioneering business model.

Yet Toms has been attacked for the unintended consequences of its good works and questioned, sometimes harshly,about the effectiveness of its giving model. At the same time, its message—although never its mission—briefly drifted. For years, the business carefully balanced stories about products with stories about giving. But over time, the marketing scales tipped toward lifestyle, which is dangerous when an idea, rather than a shoe, is the heart of your brand. Scaling a for-profit business is hard. So is scaling a philanthropic organization. Toms’ task is doing both, at the same time, and the only way it all works is if one doesn’t overshadow the other.

Given that challenge, Mycoskie may have been wise to prioritize Hoffman over recruiting a celebrity for the Oscars. Although no longer CEO, he is still the company’s public face, chief idea generator, and animating spirit. In that context, understanding his own motivations and behaviors is a core competency.

At Hoffman, Mycoskie says, he recognized a vicious cycle. “I work so hard and I am so maniacally focused on accomplishing something that I shut out other things in my life,” he says. “Then I get burned out and I do something like go to Fiji for a month of surfing. And then I feel guilty because I actually do love Toms. So I come back and I feel like I need to prove myself. I have to launch the new product and have the new silver bullet. And the whole pattern starts again.”

That pattern contributed to the rough patch at Toms. For years, the company seemed almost magical—Mycoskie built not just a business but also a movement. Toms has inspired similarly high-minded imitators, including one-for-one companies like Smile Squared and Blanket America. Corporations such as Unilever and Walgreens have based promotions on the buy-one-give-one model. And high schools and colleges across the country have fielded Toms Clubs dedicated to volunteerism and social entrepreneurship. “Social impact is not for the faint of heart,” says Katherine Klein, vice dean of the Social Impact Initiative at Wharton. “What Mycoskie did is deeply impressive.”

But even unconventional companies suffer conventional company ills. Toms and its nonprofit partners continued their good work in dusty schoolyards and rural community centers. But by 2012, the business had hired new executives, and “all they wanted to do was talk about price and create funny videos that sell products,” says Mycoskie. “I felt like there wasn’t as much soul.” Disenchanted, he took a sabbatical, moving with his wife, Heather, back to his hometown of Austin. True to his pattern, Mycoskie recharged and, in 2013, came back with a more ambitious vision.

Since then, Toms has undergone big changes. A private equity firm now owns 50 percent of the company; a new CEO is chief strategist. The culture is different too. Just as Silicon Valley companies are laboratories for new technologies and business models, so Toms is becoming a kind of Darpa for the social-venture set.

To identify the best ways to improve lives, Mycoskie is putting more than $150 million of his own money into innovative social ventures. Toms Social Entrepreneurship Fund has so far invested from $25,000 to $250,000 in a dozen companies whose missions range from helping homeless and disabled artists to making organic food affordable. And Toms is experimenting with its own giving model: expanding the definition of one-for-one, venturing into local manufacturing, and tweaking its use of donations to achieve more targeted goals. With a mountain of village dust and a sprinkling of stardust, Toms is embarking on its second act.