Lord Of The Things 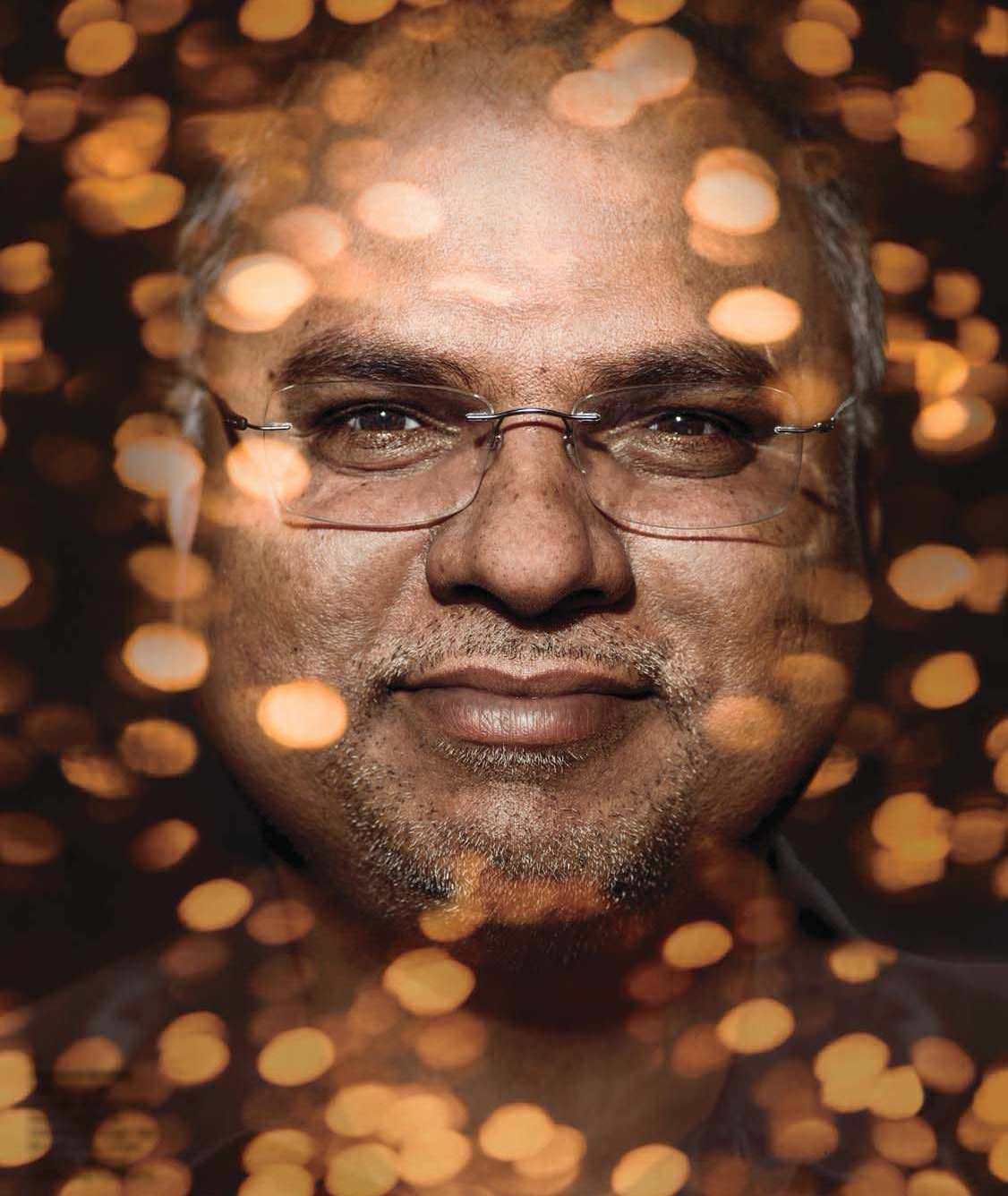 When the connected future finally arrives, Jahangir Mohammed will be sitting there, reeling it in.

Will Bourne, photo by Ramona Rosales

MY SHIPMATE IS NOT HAPPY. It isn’t the 100-degree heat, although his stubbled brown skull is visibly sweating. And it’s not the fact that we have caught exactly one tiny fish this August morning (a five-inch kokanee salmon we discovered dead on the hook). It’s not even the paramilitary vibe of the Koke Addiction, a well seasoned, 20-foot Boulton aluminum fishing skiff—bristling with antennas and nets and rods and rod holders—that would have looked right at home hunting for Viet Cong, circa 1970.

No, the problem here on the Addiction is the machines. They’re everywhere: There’s the TR-1 autopilot system, the Garmin fish finder, the side-scan sonar, the shortwave radio, four machine-gun-like black Cannon electric downriggers, and the 200-horsepower Yamaha outboard paired with an 8-horse Yamaha trolling motor. And then all around us are the damn Jet Skis, the boats pulling inner tubers and water skiers, the houseboats, and the other fishing charters. If you like your nature as God intended it, in other words, Lake Berryessa which looks from space like a blissful blue parallelogram just north of Napa, California—is a special slice of hell. “This,” says Jahangir Mohammed, glumly, “is not how fishing should be.”

That’s quite a statement, coming from the CEO of Jasper, a 400-plus-person firm built on a love of the mechanical, the automated, and the data-driven. Jasper likes to call itself “the ‘on switch’ for the internet of things,” the increasingly vast body of devices that now speak to one another over the internet. And that’s a pretty apt description. With the cost of computing power and internet connectivity falling fast, networked intelligence is turning up just about everywhere these days: the moisture sensor on an apple tree, an assembly line full of industrial robots, the watch on your wrist, or the Ford you drive home every night. And Jasper, valued at $1.4 billion and widely expected to go public soon, is the reptilian brain for much of that network, ensuring that the nodes are on and aware and functioning as they should be.

“The internet of things is not about things,” says Mohammed, a burly Indian with meaty hands and a beaming tap-toothed smile. “It’s about becoming connected.” Once connected, each “thing” is “part of a bigger fabric,” he says. “And you can make money off the fabric by making the thing a conduit through which services are delivered. So that means you need software to create, launch, manage, bill, and monetize the service. That was our original insight.”

Jasper, based in Santa Clara, California, keeps that conduit functioning smoothly. “We don’t make the device” that generates the data flowing through the IoT, Mohammed explains.“We don’t make the application” that collects data for the customer. “And we don’t make the network that transports the data. But we make the last part, the software. The function of the software is to pull the other three pieces together.”

If Jasper is a rather gray, faceless entity (outside a tiny coterie of IoT dorks, few know the company even exists), it has nevertheless used the $204 million it has raised to date to stake out an ingenious position: the middle. And while the company is “too techy and in the weeds” to attract much notice outside of Silicon Valley, as Forrester Research VP Frank Gillett puts it, there’s a reason “investors there are gaga about them.” That reason is the fact that the IoT is not some theoretical marvel lying just over the horizon—it’s already here, it’s enormous, and its growth is explosive, especially in the business-to-business sphere Jasper inhabits. McKinsey estimated in June that, across the global economy,” the larger IoT will have “a total potential economic impact of $3.9 trillion to $11.1 trillion a year by 2025.” Cisco puts that number at $19 trillion. The general consensus seems to be that something on the order of 50 billion devices (including PCs, laptops, and cell phones) will be connected by that year.

Mohammed, 46, is obsessively focused on being in the midst of as many of those connections as he can be. Since co-founding Jasper in 2004, he has been building out a global footprint that now comprises a partner network of more than 100 wireless carriers on the one hand, and more than 2,700 of their customers on the other: Amazon, GE, Starbucks, Coca-Cola, and nearly every automaker—they all rely on Jasper’s software platform, which they access via a simple dashboard called Control Center. (Jasper also has major strategic partnerships with Microsoft, Salesforce, and, as of October, IBM.) The dashboard allows each company to monitor its entire universe of devices remotely, whether that means the backup systems for Starbucks’ cash registers or the network of gunshot-detection monitors operated by Newark, California–based ShotSpotter. Jasper gets paid by the carriers but works closely with their customers, managing not only the internet connections of their “things,” wherever they may be, but also performing core services such as making sure the things are working properly, turning them on or off, updating software, and tracking data use. So when, for example, a GM car offers up a menu of music from Pandora, or an engine-service alert via OnStar, or a video streamed from Netflix, it is Jasper that makes sure each connection is working and secure, and tracks and bills for every megabit of data flowing through that connection.

That may sound unsexy in the extreme, but “Jasper is quickly  becoming a global standard,” says Gartner Research vice president Eric Goodness. “There are millions and millions of connections that are achievable, that can be torn up, torn down, built up quickly and effectively, because of Jasper.” What’s more,Jasper gets a cut “on every machine-to machine connection [it maintains],” he says. “What they do is very, very important.”

Mohammed’s strategy has essentially been to scale Jasper quietly, one partner ship at a time, to the point where no one can catch him. Along the way, he has put the company at the center of the next big technological phase change: In the same way Dell and Microsoft profited from the move from mainframes to desktops and laptops, and Apple from the rise of cell phones, Jasper stands to ride the next wave of miniaturization—the penetration of computing power and connectivity into the tiniest artifacts of daily life. “The architecture of computing is becoming one of plenty and atomization,” says David Rose, CEO of Ditto Labs, an image-recognition software platform, and author of Enchanted Objects, a book about the future of the IoT. “Instead of the consolidation of functionality in the phone, you have this functionality that comes embeddable in jewelry and cars and nearly everything. I think it is the biggest macro trend of our time.”

Mohammed recognized that trend earlier than most. He co-founded Jasper four years before IBM began its push to build a “Smarter Planet” and a full eight years before Cisco announced its “Internet of Everything” campaign. And now,he says, after more than a decade of very stealthy building, and with his company successfully enmeshed in the business operations of thousands of brands, “we are about ready to come out.” 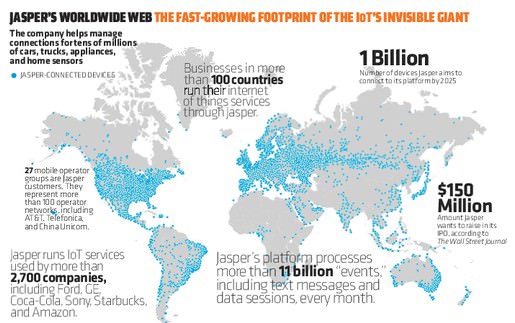