How To Build A Community-And Keep It Thriving 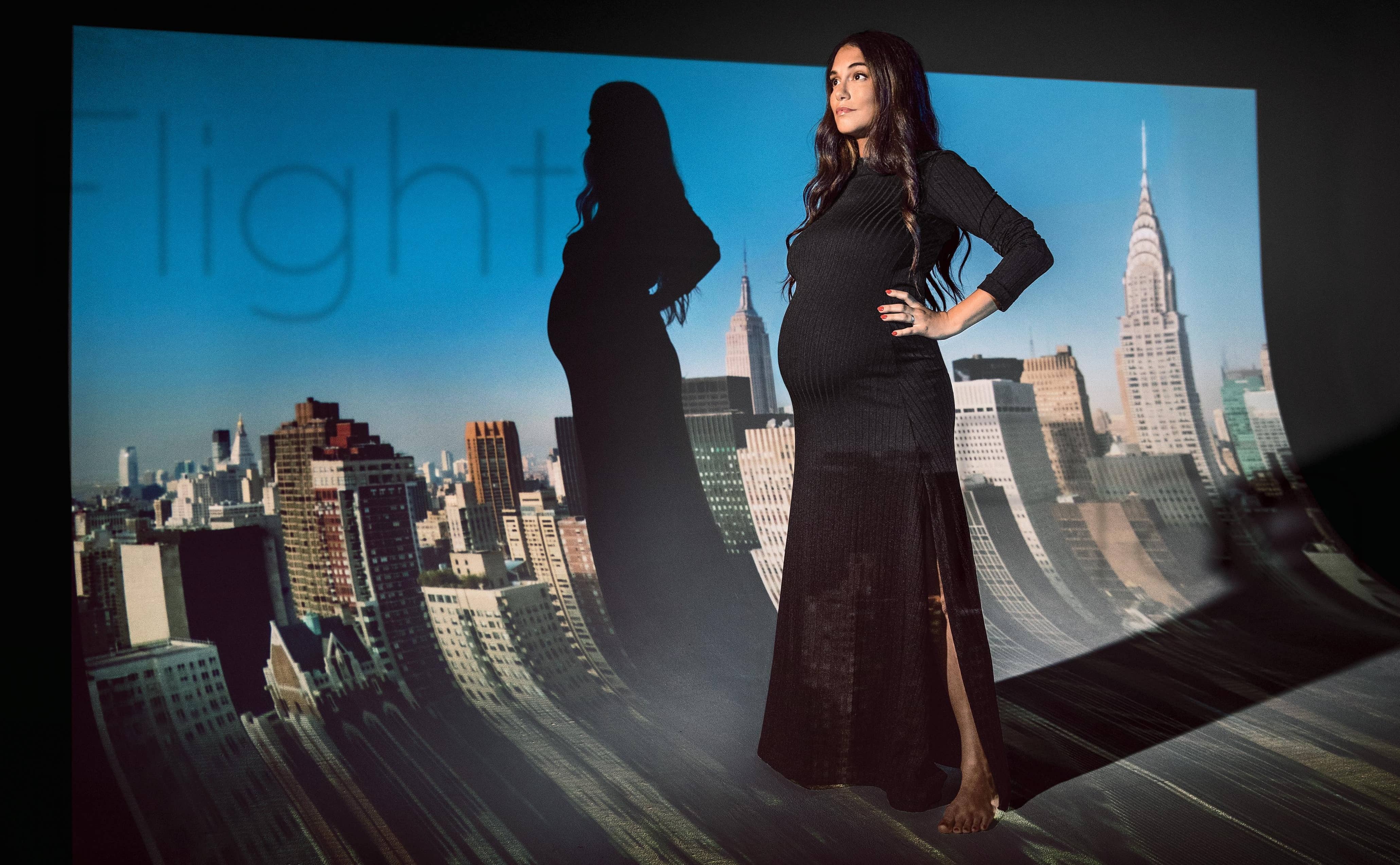 Audrey Gelman has made the Wing’s women-focused shared office spaces into a buzzy club of feminine empowerment built on inclusivity—and, perhaps, exclusivity. Change can be messy. But this is a new kind of company.

To enter 52 Mercer Street, a five-story building in Manhattan’s SoHo neighborhood, on a Wednesday this past June, a visitor had to shimmy through a gaggle of paparazzi and three bouncers issuing wristbands and whisking ticketed guests to a single elevator to the top floor. Inside, the co-working space-slash-women’s club the Wing had been transformed into an assembly hall. There was a murmur of anticipation among the crowd of roughly 400, most of whom contentedly sat for nearly an hour under instructions not to rise from their assigned seats. It was barely 8:30 a.m.

At 9:30, Audrey Gelman, six months pregnant and wearing a button-up jumpsuit the color of porcelain, took the mic. Facing a sea of women, with a massive bookcase dripping with greenery behind her and light from an atrium pouring down on her, Gelman finally spoke: “I feel like a schmuck doing this.”

It was a charming bit of self-deprecation from the 32-year-old CEO, who co-founded her New York City– based company with Lauren Kassan in 2016 and has raised $117.5 million in venture capital. The Wing has eight locations across the U.S. and plans for three more before the end of the year and another nine around the globe in 2020. It will hold some 2,000 members-only events in 2019, lots of them featuring A-list guests from Hollywood, Silicon Valley, professional sports, and politics. So Gelman was hardly uneasy in the spotlight— subtly working the crowd and setting a calming, we’reall-on-the-same-level-here tone. She took a breath and spoke into the microphone: “Meryl Streep!”

Everything a member of the wing touches has been selected for its wing-Iness, from the art by women, transgender, and nonbinary artists to the jelly on the toast in the cafe.

Streep did not appear; instead, Reese Witherspoon strode out from a dark hallway into the massive room. “Reese Witherspoon!” Gelman corrected herself, and continued introducing the stars of HBO’s Big Little Lies, including Laura Dern and Nicole Kidman. Finally, Streep emerged. She sat down and gazed up at the ceiling of industrial windows. “Good lighting,” she said, performing a mock hair flip.

The discussion that followed touched on domestic violence, Hollywood’s lack of women storytellers, modern motherhood, #MeToo, and the genesis of Big Little Lies, a collaboration between Kidman and Witherspoon. “I am of a generation that waited to be asked to dance. I’m so admiring of you,” Streep said of her fellow actors. “The world deserves to hear from you, and you, and all of us,” she continued, bringing the audience into the circle of admiration. The hundreds of women—New York City entrepreneurs, freelancers, and others who each pay more than $2,000 a year for access to the Wing—erupted in whistles and applause. 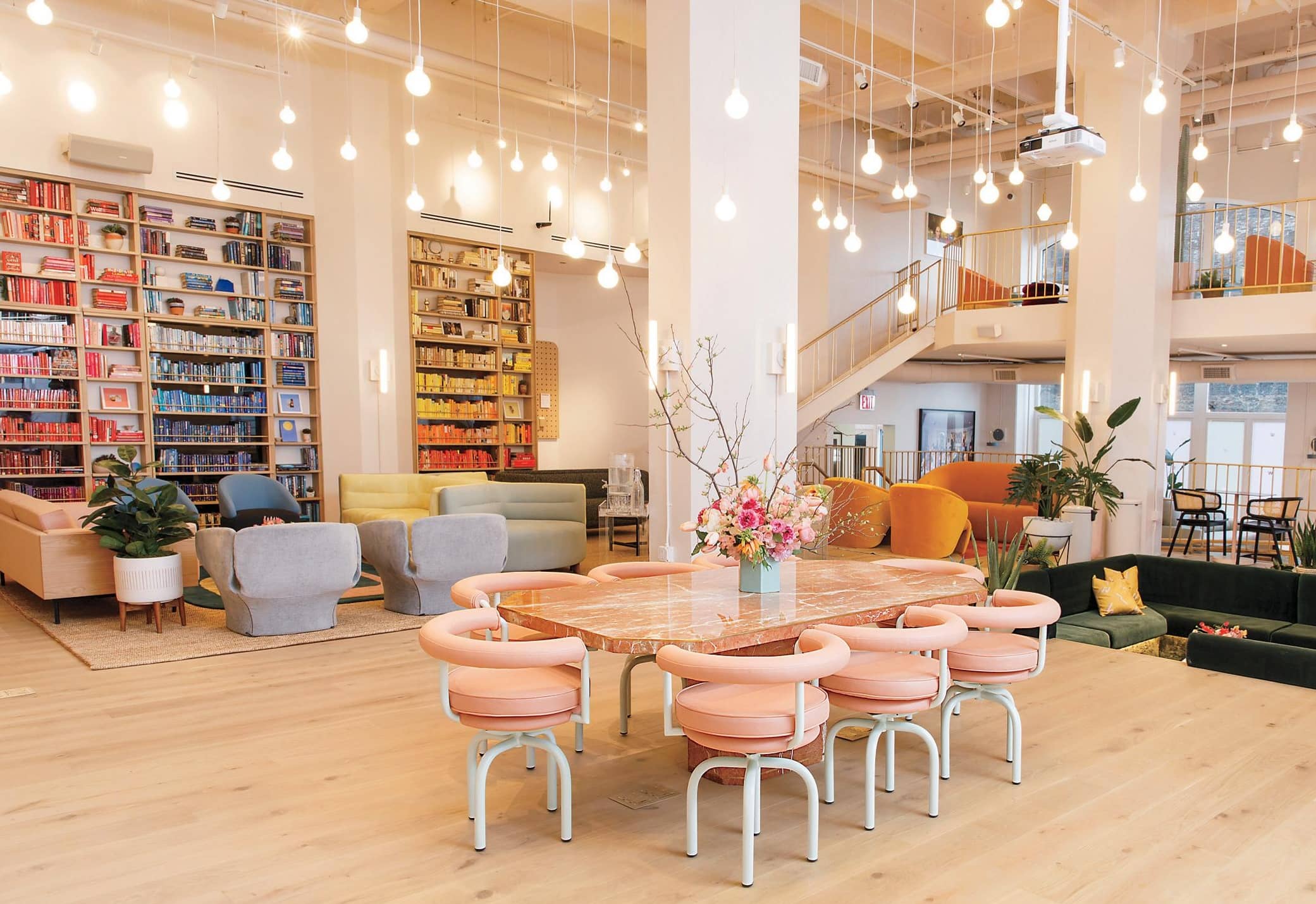 Streep, of course, is a master at connecting with audiences. But so is Gelman, who has a fan base that might make some stars jealous. The business she has created is, at first glance, not so different from most co-working places. It leases expensive real estate, adds Instagramfriendly design and some offce accoutrements, and then subleases it out, in tiny chunks. To the women it attracts, though, the Wing is something far more powerful than a pastel WeWork for ladies.

“Women were looking for a place where their voices were the dominant ones, and what was going on in the culture made it urgent,” says Colleen DeCourcy, the co-president and chief creative offcer of ad agency Wieden + Kennedy and a board member of the Wing. The brand emerged at a pivotal time for women’s issues, she notes, when Donald Trump was entering the White House, women were organizing marches, and sexualassault scandals were proliferating. Especially in blueleaning major urban centers, an unabashedly feminine space that felt safe and empowering played like a proudly defiant middle finger.

The Wing expects to have 15,000 members by the end of this year—a nice number, but modest considering the hype. What’s more telling: The Wing has nearly 500,000 followers across social media, few of whom live in cities with Wing locations. These are fans. Of an offce. In a city where they don’t live. Or, more accurately, they are acolytes of what the Wing has come to represent.

But if the Wing has become a symbol of the times, it is also a business, and one with a huge sum of venture capital from investors who expect lightning-fast growth. The Wing is often compared with WeWork, which in nine years has opened more than 525 locations and signed up 500,000 members—and which managed to lose $1.9 billion in 2018. That was all in a growth economy; what happens when the next downturn ripples through the real estate and job markets remains to be seen for WeWork and its ilk—as WeWork warned in its August IPO filing. Gelman contends that her plan “is not about blitz-scaling. It’s about creating quality and meaning and doing everything with real intention.” That’s why, she says, each Wing location so far is profitable. But reaching the next level of growth—and sustaining it in shaky times—requires a whole new flight plan.

The Wing doesn’t rent white-box real estate in random offce towers; instead, it leases the likes of its new Manhattan headquarters, a four-story neo-Italian Renaissance building that once housed a women’s hospital wing. Its first club opened in a historic district called Ladies’ Mile, just off Park Avenue, and earlier this year the company tried to land a 17th-century limestone building in Paris that was the former home of Madame de Montespan, a mistress of Louis XIV who reputedly banned all men from her property.

Inside every Wing location, the foundational color is blush pink. In Washington, D.C., the floors are pink. In Boston, a sweeping staircase is pink. The SoHo space features all the elements Wing members (and would-be members) recognize: Long banquettes line the walls, punctuated by terrazzo-topped, brass-footed tables perfectly sized for a MacBook. Jewel-tone velvet couches form mini living-room setups in the open space; highbacked red armchairs create semiprivate workspaces. No locations are identical; each is a variation on the theme.