How A Terrible Day Spawned a $70 Million Business 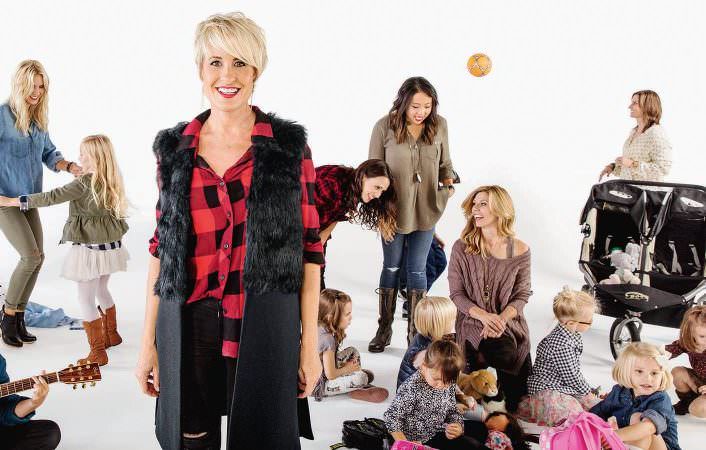 Megan Tamte was living her lifelong dream of motherhood - and she was miserable. Launching a store for other mothers turned everything around.

WHERE WERE YOU on the night of May 21, 2003? Here’s a guess: in your living room, on your couch, among the 38.1 million viewers watching the season two finale of American Idol. That program is now winding down its 15-season run, but the second year’s last show was its peak—the most watched episode in series history. The one when Ruben Studdard edged out Clay Aiken. Do you remember?

Megan Tamte will never forget. She was a young housewife then, barely 30, living in Concord, California, with her handsome, hard-working husband, Mike, and her two beautiful children, Allison and Ryan. Motherhood was her calling, and she believed in her heart that she was happy. Except that lately there had been rumblings.

Persistent insomnia, tears she couldn’t stanch, too much reality TV. “Mike would come home from work and I would be crying, and I didn’t really know why,” she says. “It just felt very weird, because I loved being a mom. I was in love with my kids, and I loved taking care of them. But there was something else going on. There was something else that wasn’t quite right.”

She managed to keep up a brave face during the day; her children were oblivious. But at night, it was all she could do to collapse on the couch and switch on the TV. American Idol, Big Brother, Survivor—hour after hour, night after night, and it was never enough.

Until, one night, there was Ruben Studdard, in his hour of triumph. Closing the show with an emotional cover of a U.K. hit single, “Flying Without Wings.” “You’ve got to fight for every dream,” he sang in a cloud of swirling confetti, “’Cause who’s to know which one you let go/Would have made you complete…”

And here was Megan, on the sideline, observing. That’s when something clicked: “You’re just sitting around watching other people’s dreams come true,” she told herself. Followed by a stark and deeply personal directive: “You can’t be a spectator anymore.” Followed—rapidly, improbably, dramatically— by an act of business creation.

TODAY, MEGAN IS LIVING her own outsize dream—and is as likely to star in a reality-TV show as to watch one. She’s CEO of Evereve (formerly Hot Mama), a fast-growing, 59-store national chain of boutiques aimed at young mothers. Launched in suburban Minneapolis in 2004, with a $75,000 SBA loan and a couple hundred thousand dollars from friends and family, Evereve today is profitable, debt-free, and on pace to deliver nearly $70 million in revenue this year.

“You look for certain things in retail,” says Gordon Segal, co-founder with his wife, Carole, of Crate & Barrel. The Segals recently invested in Evereve, alongside Winona Capital of Chicago and the Lewis family, founders of London retailer River Island. “Obviously, product is important,” says Segal. “But how is it displayed, how does it feel, and is there passion in the organization? I found all those ingredients.”

We should point out that Megan’s achievement coincides with what’s been a brutal stretch for women’s retail in the long wake of the Great Recession: Among the recent casualties are Coldwater Creek and Caché, both of which went bankrupt in the past 18 months. She’s also part of a gender cohort that finds itself on a persistently uneven playing field: While women own about 36 percent of all businesses, only 2.7 percent of all U.S. venture funding goes to women CEOs, according to Babson College. And the scale of Megan’s realized ambition is rare for an entrepreneur of either sex: A recent report by American Express Open reveals that only 9 percent of all U.S. businesses generate even $500,000 in annual revenue, and only 4 percent of women-owned businesses reach that threshold.

Above all, in beating those considerable odds, Megan had to overcome one more obstacle, specific to her maternal identity and her sense of self—her “deep fear,” she says, that succeeding in business might mean failing as a mother.

“MY BIGGEST DREAM,” says Megan, “and I always owned it, was I wanted to be a mom.” She went on her first date with her future husband two weeks after she arrived at North Park University, a small college outside Chicago affiliated with the Evangelical Covenant Church. Mike was two years older, blond and blue eyed like Megan, studying to be a CPA. They married two weeks after Megan graduated (soft drinks only at the reception) and moved to Santa Cruz, California. Mike worked at a church camp and Megan taught third grade, until, at 23, with the birth of their first child, her dream came true. She quit her job and settled in at home. “Are you crazy?” her friends asked her.“Shouldn’t you have a career first?”

But motherhood was Megan’s career, her considered and deliberate choice. She’d been preparing for it her whole life— in her childhood bedroom with her best friend, Dawn, feeding doll babies and putting them down for naps, and next door at the Burkes’ house when she got a little older, looking after five children at once. Megan wasn’t a top student, she didn’t play an instrument, she wasn’t great at sports. “Your gift,” her mother used to tell her, “is taking care of the Burke kids.”

Soon, she was taking care of two of her own, and she was all in—playful, supportive, dependable, and present. She put her children’s needs first, made sure they were comfortable, secure, never bored. Megan’s own parents had divorced when she was a teenager. Not an awful breakup—her dad moved out of the house, not out of her life—but it rocked her world. This was her chance to do better—to “re-create what I didn’t have,”Megan says. She felt fulfilled, happy, and whole. For about five years. “Then,” she says, “I kind of went into this funk.”