THE WINNER TAKES ALL 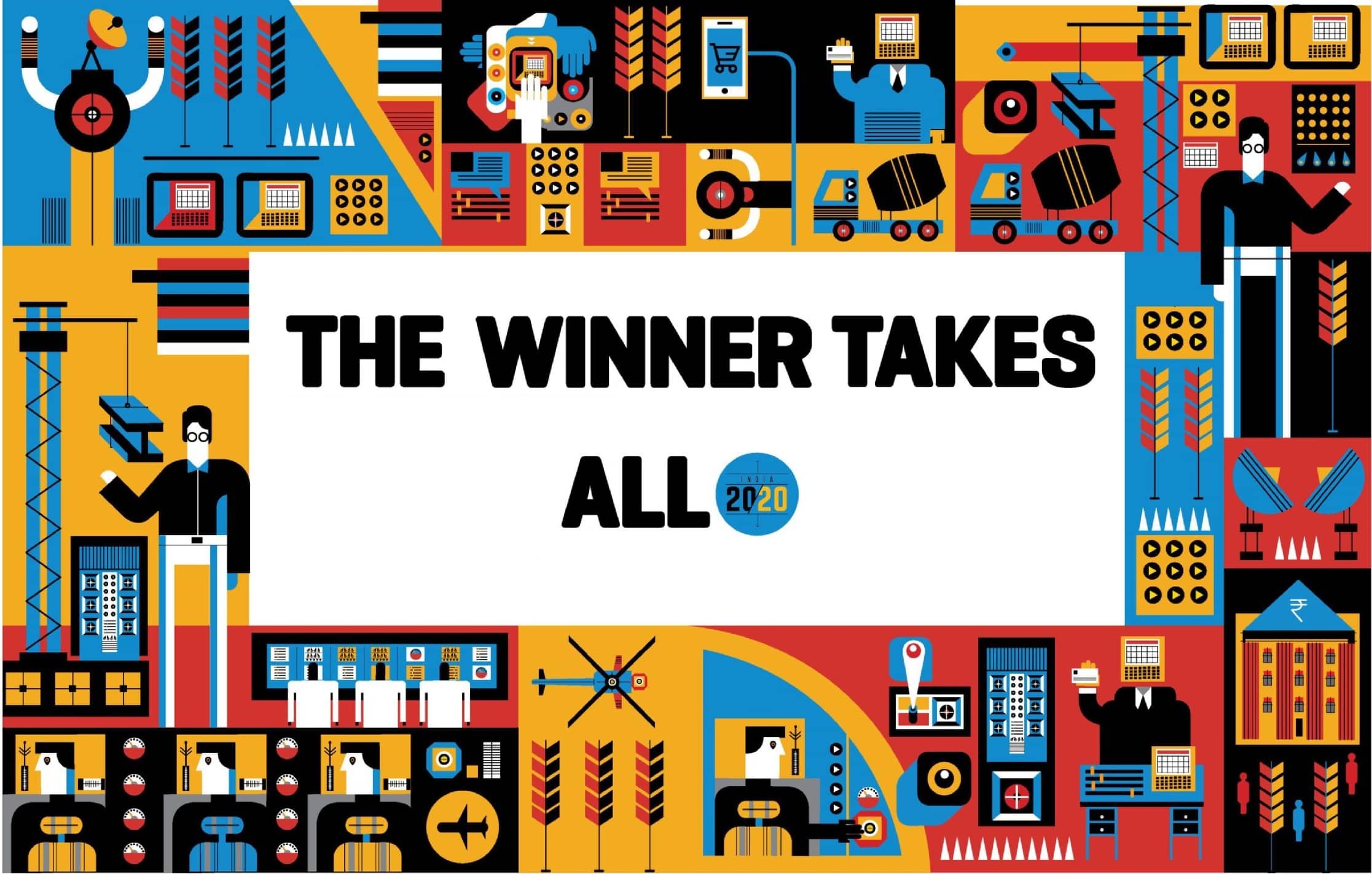 THERE IS A NEW WAVE OF CONSOLIDATION ACROSS SECTORS IN THE ECONOMY. SHOULD INDIA BE WORRIED? OR, IS IT A RITE OF PASSAGE?

The Rise of Oligopolies

Back in April 2011, in their seminal article ‘Monopoly and Competition in 21st Century Capitalism’, in the Monthly Review journal, authors John Bellamy Foster, Robert W. McChesney, and R. Jamil Jonna had posited a contrarian argument.

THEY HAD ARGUED THAT the economic defence of capitalism, as premised on the “ubiquity of competitive markets, providing for rational allocation of scarce resources and justifying existing distribution of incomes”, no longer holds true.

This line of thought is getting validation across the world. Capitalism is no longer seen to be promoting competition. Instead, it is pushing economies towards greater consolidation and creating oligopolies. India, a late entrant to this game, is experiencing this trend, particularly in the telecom, steel, cement, and e-commerce sectors where only three to four big players are still standing.

Those that have fallen by the wayside (either acquired or shut down) have been singed by one or many factors: Increased competition, entry of players with better technologies, changes in government policies, stringent regulations, new Supreme Court rulings or a slowing economy. Often, this can get compounded by internal issues such as operational inefficiencies, mismanagement and even siphoning off of funds by promoters.

The trend of consolidation is notable among state-owned banks. In 2019-20, the number of public sector banks is being brought down from 21 to 12, with the government hoping that stronger balance sheets and good governance would create sounder credit growth and command better valuations. Conglomerates, too, seem to have realised the futility of running multiple (non-core) businesses on a stretched balance sheet in these unforgiving conditions.

Of course, consolidation can also take place during a significant upswing in the economy. “However, more acquisitions happen during a downturn because good quality assets are available at reasonable rates, which are then picked up by financially strong companies,” says Sanjeev Krishan, partner and lead-deals, PwC India. Moreover, companies—badly bruised by falling margins—accept the upside of letting go rather than become an insignificant fifth player in the market, adds Krishan.

The implementation of the Insolvency and Bankruptcy Code (IBC) Bill in December 2016 has hastened the pace of or, at least, facilitated acquisitions. “The IBC, though a work-in-progress, has been a crucial driving force as a mechanism for price discovery and recovery of distressed assets in the time frame,’’ suggests Bain & Company’s India M&A report 2019.

“Distressed asset acquisitions accounted for 70% of the growth in the deal value in 2018 compared to 2017,” it adds.

For the acquirer, it is inevitably a win-win. Existing leaders gain economies of scale and market share, helping them pull further away from competition or becoming better equipped to fight it. For instance, UltraTech’s acquisitions of Jaypee Cement (2017) and Binani Cement (2018) have solidified its position at the top of the cement sector. Airtel’s purchase of Tata Teleservices’ and Telenor’s assets in India will help it take on the might of Reliance Jio. Global companies also use the acquisition route to make a foray into the growing Indian market: Take Wilmar Sugar Holding’s takeover of Shree Renuka Sugar (2018) or ArcelorMittal’s bid for Essar Steel.

Not surprisingly, the consolidation drive has seen a jump in the market share of the top five players across sectors. In telecom, they control 99.6% of the market as of FY19, compared to 79% in FY14. (Sooner rather than later, the sector is likely to turn into a two-horse race.) The corresponding leaps in cement are to 50% from 46% and in steel to 58% from 51%.

The question that needs to be asked, then, is: Should a developing country like India, which needs huge investment and several players to build its infrastructure, see the rise of oligopolies? On the one hand, the U.S. experience is not comforting because dominant players have used their muscle power to throttle competition, invested less in the real economy, brought down productivity, hiked prices, resulting in greater inequality in the system. On the other, as PwC’s Krishan points out, in an economy characterised by low demand and excess capacity, having limited players with strong balance sheets can be a boon. When demand picks up, new players will rush in despite high entry barriers and imposing competition.

In the pages that follow, Fortune India decodes how the consolidation story is playing out in various sectors of the economy.

FOR AN INDUSTRY THAT is highly capital-intensive, prone to cyclicality, critically dependent on the state of the economy and easily hurt by price volatility, consolidation is a welcome trend. No wonder Seshagiri Rao M.V.S., joint managing director and group chief financial officer of JSW Steel, is a happy man. “It [consolidation] allows major players with sound financial health to sustain their businesses even in the most challenging times and also provides some stability to the sector,” he says.

JSW’s acquisition of the bankrupt Bhushan Power and Steel was recently approved by the National Company Law Tribunal (NCLT). It is one of the many moves that have followed the implementation of the IBC bill in December 2016; several erstwhile major steel producers found themselves on the defaulters’ list, divested of management powers and with their assets in the custody of the NCLT at the behest of the Reserve Bank of India (RBI). The first list of 12 names included the likes of Essar Steel, Bhushan Power & Steel, Bhushan Steel, and Electrosteel Steels. The latter was picked up by the Vedanta Group and Bhushan Steel has been merged with Tata Steel. “Today, there are only three major flat steel producers left in the country,’’ says Rohit Sadaka, director, corporate ratings, at India Ratings and Research, down from eight key players earlier.

Apart from the obvious economies of scale, consolidation also allows new players to enter the fray. The Supreme Court recently gave its nod to ArcelorMittal to acquire Essar Steel, paving the way for the Lakshmi Niwas Mittalled firm’s comeback into India. Having a limited set of players also provides stronger negotiating power with suppliers, reducing the cost of logistics and raw materials procurement. This improves margins and profitability.

“Higher margins allow companies to invest in research and development and thereby improve the quality of their products and add new items to their portfolio,” says Rao.

Acquisitions can positively impact the efficiency of distressed assets too. “Even by merely changing the coking coal blend and using different kinds of iron ore [inputs for steel making], we were able to cut costs and improve the efficiency of the plant significantly,’’ says Pankaj Malhan, deputy chief executive officer, Electrosteel Steels.

However, there won’t be any increase in pricing power, says Rao. “Since steel is a tradeable commodity in the international market, any attempt to hike the price of a product unilaterally by one company is likely to boomerang because customers will shift their allegiance to another player,’’ he says.

Benefits of consolidation notwithstanding, Sadaka believes that if the steel industry wants to achieve its stated goal of 300 million tonnes by 2030—an additional 160 million tonnes in the next 10 years—it needs to have more players, big and small. “It is virtually impossible for the three or four players such as Tata Steel, JSW, Steel Authority of India Limited, and Jindal Steel & Power with healthy balance sheets to increase their capacity by 4-5 million tonnes a year,’’ he says. But for potential new entrants, long-term financing will remain a challenge in the absence of developmental financing institutions like the erstwhile Industrial Finance Corporation of India and Industrial Credit and Investment Corporation of India. “We need to have these kinds of institutions again,” says Rao.

FOR ANY ECONOMY, the harbinger of growth is construction—think buildings, offices, roads, ports. Not surprisingly, the cement sector was among the first to begin consolidating and attracting investors in post-liberalisation India. By the mid-’90s, foreign companies were already on the prowl for prized domestic assets: Take French cement giant Lafarge (now LafargeHolcim), the second-largest player in the world, which bought Tata Steel’s cement business.

Indian promoters also stepped up to retain market share. Gujarat Ambuja (now Ambuja Cement) picked up a stake in ACC Limited. The Aditya Birla Group sought to take over engineering giant Larsen & Toubro, only for its cement assets (these were eventually carved out and sold to the business house). Smaller players like Shree Cement and Dalmia Cement kept pace in expansion and are among the top 10 players in the country now. This drive to expand capacity also gave the Indian stock markets its first hostile takeover: Chennai-based India Cements took on more debt than its balance sheet allowed to buy out shares of Raasi Cements from the open market to oust its promoters.

By 1996-97, the Indian cement industry had an installed capacity of a little over 100 million tonnes and its market capitalisation stood at about ₹20,000 crore. It had become a stock market darling, with then market bull Harshad Mehta counting ACC among his top picks.

That bullishness hasn’t waned given the frenetic race to acquire debt-laden Binani Cement last November. Aditya Birla Group’s UltraTech increased its bid by nearly ₹1,000 crore at the last moment, and even agreed to pay all its creditors. As Dalmia Cement MD and CEO Mahendra Singhi puts it: “India is on the cusp of great growth and infrastructure development. Though we have had weak demand so far this year, in the long term, as incomes rise, the outlook for the sector is bullish.”

Liberalisation—and the resultant consolidation—has been largely positive for the sector. From over 300 mini cement plants operating in pockets across the country, today 180 large and efficient plants account for 90% of the production; 70% of the capacity is spread across the top 10 players. The market capitalisation is over ₹3 lakh crore and, with an installed capacity of 460 million tonnes per year, India is the second largest cement market in the world after China.

A distinct feature of consolidation in the sector is that homegrown players continue to dominate unlike in the automobiles, consumer durables, or electrical equipment sectors where global firms hold sway. This can be attributed to the unfeasibility of importing cement due to freight costs. It helps that domestic firms have been able to keep up with world-class production technology.